Here Comes When comes in
News

William Buick taken to hospital after being unseated from colt

Tragedy struck on Arlington Park’s biggest day of the year when Permian suffered a fatal leg injury in the Grade 1 Secretariat Stakes on Saturday night.

Godolphin’s colt, trained by Mark Johnston, crossed the line last of six finishers in the ten-furlong contest for three-year-olds, won by the Brian Lynch-trained Oscar Performance under Jose Ortiz.

It became clear that the son of Teofilo had suffered a catastrophic fracture of his left fore and was subsequently “humanely euthanized” according to the track. Permian had enjoyed a superb season, winning two Group 2s, the Dante Stakes at York and King Edward VII Stakes at Royal Ascot.

William Buick was unshipped from Permian and taken to hospital for examination but was reported to have full movement in his limbs upon leaving the racecourse.

The big race of the evening was the Grade 1 Arlington Million and victory went to the Chad Brown-trained Beach Patrol and Joel Rosario. Fanciful Angel, representing Newmarket trainer Marco Botti, ran a huge race to finish a half-length second for Daniel Muscutt, having his first ride in North America.

Fanciful Angel, owned by Touch Gold Racing, returned at 73-1 and connections picked up just shy of £153,000 for the five-year-old gelding’s efforts. He had a neck to spare over favourite Deauville and Ryan Moore, with the other European runner Mekhtaal tenth for Jean-Claude Rouget and Frankie Dettori.

In the Grade 1 Beverly D Stakes for fillies and mares, Irad Ortiz Jnr joined his younger brother on the score-sheet when guiding Dacita to a half-length success over Grand Jete, providing a one-two for handler-of-the-moment Chad Brown. The former Hugo Palmer-trained Hawksmoor finished seventh, a place in front of the Aidan O’Brien-trained Rain Goddess and Ryan Moore. 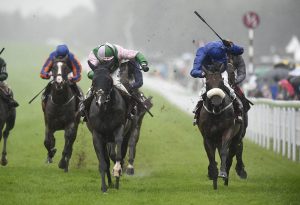 Up Next
Here Comes When comes in