Last Wednesday was truly a day to remember for emerging young trainer Ben Pauling, who, a little over a week later is still reflecting fondly on his first Cheltenham Festival success with Willoughby Court.

The Bourton-on-the-Water handler took a select number of runners to his local track, including Supreme Novice hurdle hope High Bridge.

Yet, he only had to wait till shortly after the curtain was raised on the second day to taste that elusive first Cheltenham Festival winner.

His improving novice hurdler Willoughby Court, in line with his running style before now, went to the lead from the outset in the Neptune Investment Management Novices’ Hurdle.

In the hands of David Bass, the six-year-old was hard pressed by the highly-regarded Neon Wolf coming to the last with the pair clear of the remainder.

With a never-say-die attitude, Willoughby battled on bravely to fend off the Harry Fry-trained favourite by a head.

“Everyone knows how important these successes are and all the rest of it but I don’t think you ever quite realise how much it means until it happens, not just yourself but the whole yard,” said Pauling.

“It was a very special day and it was a great ride and a very brave horse who came through. A million things can have been talked about, but the race panned out the way it did and at the end he wasn’t for being passed.”

A son of Court Cave, Willoughby Court went into the two mile and five furlong Grade 1 contest on the back of an impressive eight length win in a Grade 2 novice hurdle at Warwick.

His jumping is definitely his forte

Having been given time to recover from his exertions, the gelding is in fine fettle and a campaign novice chasing looks to be the plan come the autumn.

Pauling added: “He has actually come out of it very well indeed and looks fantastic which I can’t believe how he’s taken it. Maybe he’s maturing and maybe I’d be absolutely fine going to Aintree but I do honestly think we’ll probably give it a swerve.

“He’s a chaser through-and-through, he’s a good 16″2 with plenty of size and scope. The way he jumps is so athletic, his jumping is definitely his forte.”

Owners Paul and Clare Rooney, who have five young horses with Pauling including this one, were also enjoying their first Cheltenham Festival triumph adding to their Royal Ascot win last year with My Dream Boat. 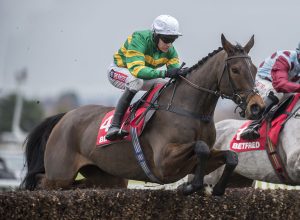 Up Next
Favourite Rocco out of Grand National