Poet's Word to the fore again at Tatts Ireland
News

A fee of £55,000 has been set for top miler Palace Pier in his first season next year at Dalham Hall Stud in Newmarket.

The son of Kingman was retired last month as the winner of nine races, among them the Group 1 St James’s Palace Stakes, Lockinge Stakes, Queen Anne Stakes and two renewals of the Prix Jacques les Marois.

Victor Ludorum retires to Haras du Logis in France at a fee of €15,000. The undefeated winner of the Group 1 Prix Jean-Luc Lagardere at two, the son of Shamardal returned at three to capture the Poule d’Essai des Poulains.

Of the established sires, Dubawi heads the Darley roster at an unchanged fee of £250,000 after a year in which he sired 23 Group winners and 37 stakes winners overall. In fact, last weekend he became the first horse ever to sire three Breeders’ Cup winners at the same meeting thanks to the victories of Modern Games, Yibir and Space Blues.

His ascendant son Night Of Thunder, the sire of Group 1 winners Thundering Nights and Kukeracha in 2021, heads the Kildangan Stud roster at €75,000.

Sam Bullard, Director of Stallions, said: “We are thrilled to be introducing three outstanding multiple G1 winners to a very strong roster, deep on quality and achievement. Following last year’s three Champion additions in Ghaiyyath, Earthlight and Pinatubo together with Blue Point and Too Darn Hot in 2020, we are confident of giving breeders every chance of benefitting from the wonderfully positive sales season we have just enjoyed.” 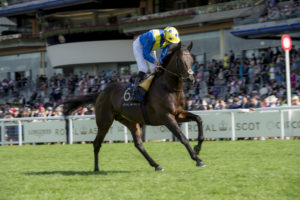 Up Next
Poet's Word to the fore again at Tatts Ireland