Father and son dominate race that stops a nation

The nascent training career of Joseph O’Brien reached new heights in the early hours of Tuesday morning as the lowly weighted three-year-old Rekindling captured the Emirates Melbourne Cup at Flemington.

It was a case of the apprentice beating the master, as Rekindling overhauled Johannes Vermeer, trained by Joseph’s father Aidan, close to the line to give the O’Brien family a famous 1-2 in the race that stops a nation.

For renowned owner Lloyd Williams, whose silks were carried by both Rekindling and Johannes Vermeer, it was a sixth Melbourne Cup triumph, a haul that kicked off with Just A Dash in 1981 and included last year’s victor Almandin, only 12th this time round under Frankie Dettori.

Corey Brown, victorious on Shocking in the 2009 Melbourne Cup, settled Rekindling in midfield on the rail in the two-mile contest, saving as much ground as he could. Turning for home Brown eased Rekindling off the rail to begin his challenge and though Johannes Vermeer and Ben Melham got first run, Brown conjured a telling late burst from his mount to edge ahead 50 yards out, scoring by half a length.

Rich Ricci’s top dual-purpose performer Max Dynamite, trained by Willie Mullins, ran a great race in third, with local hope Big Duke in fourth and the Iain Jardine-trained Nakeeta finishing like a train from his high draw to claim fifth place, earning over £100,000 for his efforts.

The successful trainer said winning the Melbourne Cup was “unbelievable – it hasn’t really sunk in yet” when interviewed immediately after the race. “He’s an absolute star” said Lloyd Williams of the 24-year-old handler, the youngest man ever to capture the famous contest.

The first three home are all trained in Ireland. Rekindling was bred by the Pocock family, by High Chaparral out of Sitara, the mare bought for just 10,000 guineas from Luca Cumani’s Fittocks Stud. 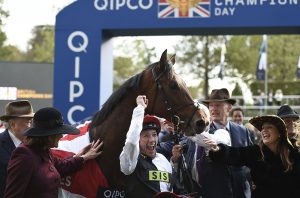 Up Next
Cracksman simply sensational