Castlehyde Stud’s No Nay Never colt topped the first day of the relocated Tattersalls Ireland September Yearling Sale when snapped up by Adam Driver of the Global Equine Group at £130,000.

Out of the winning Galileo mare Pink Damsel, herself out of the three-time Grade 1-winning Dynamore mare Riskaverse, the colt is a half-brother to the winning Glengowan and to Sarsons Risk, who was purchased for 120,000gns earlier this year at the Tattersalls Craven Breeze-Up Sale.

Paddy Fleming, Castlehyde’s Manager, said: “We brought him here to stand out. The mare has been good to us – Sarsons Risk looks quite promising and was third first time out at Newbury since the catalogue was published. He is due to run at Newmarket on Thursday.

“He is a very straightforward horse, he vetted well. He was born and raised at Castlehyde and he has grown into a grand yearling. Numerous people viewed him, and he was an easy sell really.

“The mare has a lovely Ten Sovereigns colt foal and is in foal to Wootton Bassett.”

Mark Hanly and his mum Stephanie were rewarded at Park Paddocks on Tuesday when their Churchill colt was another to be snapped up by Global Equine Group, this time at a sum of £110,000.

The pair had sourced the colt’s dam, the Kodiac mare Komedy, for just 9,000gns at the Tattersalls Autumn Horses in Training Sale in 2015 and she has since produced the winning Internationaldream, who was third in last year’s Molecomb Stakes.

Hanly said: “He is a very taking individual and I thought to myself that he’d be stand out at this sale. He is a magnificent looking animal and, it is early days, but the sire is ticking all the boxes.

“It is a very nice fast family, and he is out of a Kodiac mare and they are working very, very well at the moment on the track. He is just a magnificent colt and a very good sale to have him in.

Purchaser Driver said: “I loved this horse. We have two Churchills in training with Tom Clover, both of which are really nice. We like what we have got so far.” pic.twitter.com/5eGKfsCF5a

“Komedy has already bred Internationaldream, who has black type, and Jessica Harrington has the full sister and from what I hear she is promising.

“The mare is a typical Kodiac and when I first saw Churchill at stud, I absolutely loved him. He has a big physique and would suit a Kodiac mare, and the cross suited too – Danehill and Galileo. The mare is barren this year but had an early covering to Saxon Warrior.”

Driver added: “I loved this horse. We have two Churchills in training with Tom Clover, both of which are really nice. We like what we have got so far.”

Taking up the story, Carrick revealed: “We actually bought this horse lying in bed! It was online shopping! I came in after work, loved him when I saw him on the video, how he walked, how he showed himself.

“A special thanks goes to my uncle Johnny Collins, he owns him jointly with myself and my girlfriend Michelle Gibbons, and thanks also to trainer Richard Brabazon, he allowed me to use his facilities to prep the horse.

“I worked for Richard when I was younger – from college I’d go down to Dick at the weekends. Thankfully we struck up a nice little relationship whereby he lets me have use of his facilities, it is definitely special thanks to him.”

Farhh filly off to Richard Hannon

Having had success with progeny of Farhh, most notably Group 1 winner King Of Change, it was no surprise that the intended trainer of Knockainey Stud’s filly by the son of Pivotal is Richard Hannon.

During his care, King Of Change finished second in the 2019 running of the QIPCO 2,000 Guineas before ending his season with victory in the QIPCO Queen Elizabeth II Stakes.

Bloodstock agent Ross Doyle, who signed the docket at £90,000 for the individual, said: “She is by Farhh and Richard obviously had a very good horse by him in King Of Change.

“We have been very lucky buying off Nelius Hayes of Knockainey Stud over the years. She is the nicest filly Nelius has brought to the sales for a few years. She is medium-sized, she is nicely sized and she has a bit of class to her.”

“He’s by Footstepsinthesand, a stallion with whom we have had a lot of luck with, particularly at this sale. He is a nice horse and he has been bought for @rhannonracing on spec.” pic.twitter.com/031Qc6Q5QZ

Hayes added: “A friend of mine and neighbour Michael O’Dwyer bought her [Imasumaq] here at the December Sale. This has been a fantastic result. Everybody just seemed to like this filly. We had no expectations of anything like that coming, but as the days go one you get hopeful!

“I am delighted Richard and Ross got her; I have had horses in training with Richard. Ross’s dad Peter bought my first mare a long time ago, she was called Rain Dancing. They are fantastic judges, if she has any luck at all she will win where she is going.”

Doyle made three other purchases for Hannon during Tuesday’s session including a £62,000 Footstepsinthesand colt from the draft of WH Bloodstock. The other two purchases were a colt and filly by Profitable who cost £50,000 and £48,000 respectively.

He added: “Lot 27 is by Footstepsinthesand, a stallion with whom we have had a lot of luck with, particularly at this sale. We bought Larchmont Lad at the sale a bit ago. This colt comes from a very good home. He’s just a nice horse and he has been for Richard on spec.” 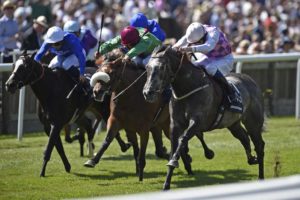