Ryan Moore notched his 2,000th career win at Kempton Park on Wednesday, after he partnered the Richard Hannon-trained Billesdon Brook to success in the Fillies’ Novice Stakes on the card.

Ridden prominently, the two-year-old filly powered clear in the final furlong to give Moore an easy six-length victory and a career landmark.

He went on to complete a double on the card after steering Gibbs Hill to a similarly emphatic success.

The win means that Moore joins only a very small handful of riders who have reached the 2,000 mark. Among jockeys still competing, only Frankie Dettori, who has partnered 3,068 winners, and Joe Fanning [2,198] have bagged more.

Regarded as one of the best in the world at his trade, over the last few years he has formed a formidable alliance with Ballydoyle which has seen the partnership bag a plethora of wins at the highest level.

After starting out as an amateur, he tasted his first victory over jumps as a 16-year-old. That came on his father’s Mersey Beat back in May 2000.

The 33-year-old notched his first Classic in the Oaks aboard the Ed Dunlop-trained Snow Fairy in 2010. Workforce gave him a second Classic and first Derby success 24 hours later. 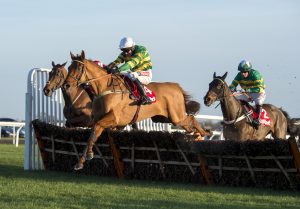