Gifted Menorah goes out with a bang
News

One of Ballydoyle’s leading lights in 2016, Minding, began her four-year-old campaign with an emphatic win on her return in the Group 2 Camelot EBF Irish Mooresbridge Stakes at Naas.

In the hands of Ryan Moore and facing only three rivals, she went to the front racing keenly.

The leading duo quickened the pace inside the three furlong pole obtaining a healthy advantage over the pursuers led by Jim Bolger’s Moonlight Magic.

Minding kept on nicely on the run to the line and was pushed out to score by three and a half lengths.

A daughter of super sire Galileo, Minding took all before her throughout her three-year-old season beginning with a ready win in the 1,000 Guineas.

She then landed the Investec Oaks despite meeting trouble in the race. Three more Group 1s followed including in the Irish Oaks, the Nassau Stakes and against the boys in the Qipco Champion Stakes.

Aidan O’Brien said: “It was just to get her out really, Ryan [Moore] was very happy with her. She was enthusiastic and settled after going a little bit and quickened up very well.

She’s changed from three to four to look at

Attention will turn to the first two Classics of the season this upcoming weekend at Newmarket.

Reported to have worked well ahead of his big assignment, he heads straight to the race without having had a trial. 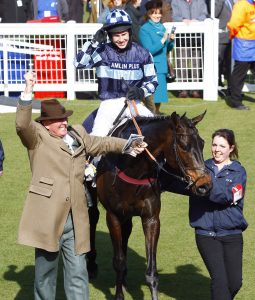 Up Next
Gifted Menorah goes out with a bang