Fergal O’Brien and Paddy Brennan teamed up for success in this year’s renewal of the £70,000 feature

One of jump racing’s most potent combinations this season, Paddy Brennan and Fergal O’Brien, were once again in the headlights as they took out this year’s running of the Betfred Midlands Grand National with Chase The Spud.

The nine-year-old, who had not won for over a year, was held up in mid-division by Brennan with the remaining 19 runners taken along by Alfie Spinner over the four mile and one furlong trip.

As the field began to string out coming into the straight for the last time, Eider winner Mysteree jumped to the front after three out.

Chase The Spud was someway back still after the third last but closed the gap to just three lengths on the leader after the second last.

He joined Mysteree over the last and although one length down got by his rival in the short run-in to score by a length and a half.

For Brennan, this valuable win came as a welcome tonic following the disappointment surrounding Cue Card’s departure at the third last in the Gold Cup on Friday.

“Never for three quarters of the way was I winning but I kept it in my mind that there was only going to be a few finishers,” reflected Brennan.

“I’m so proud of the horse because there’s always been an excuse and the owners been extremely patient and I’m delighted to get a good one for Fergal O’Brien.”

A son of Alflora, Chase The Spud last tasted success back in February 2016. He reverses form with Mysteree who beat him by a couple of lengths in a staying handicap chase at Haydock in November.

Never for three quarters of the way was I winning

The Naunton-based handler is enjoying his best season by a considerable margin. With 55 winners on the board, this gain in prize money takes him past the half a million pound mark.

O’Brien said: “Had a good Cheltenham and had a good second in the Pertemps, disappointed for Paddy yesterday.

“Today’s today he’s given that a fantastic ride. Christine Banks bred this horse I love the family. Paddy got some great tune out of him.” 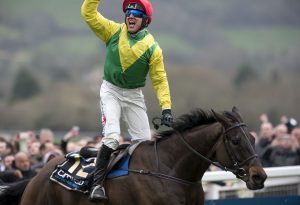 Up Next
Sizing John lights up Cheltenham