By The Owner Breeder staff 30 September 2011

Members of the racing community in Newmarket and beyond packed St Mary’s Church and the next-door Turner Hall on Friday for a service of celebration for the life of trainer Michael Jarvis, who died last week at the age of 73.

Jarvis’s wife Gay and his daughters Sarah, Lisa and Jackie led the mourners following a private cremation earlier in the day.

His successor at Kremlin House Stables, Roger Varian, paid a moving tribute to he man he called his “governor, mentor and friend”.

He said: “Michael was everything we aspire to be. He was a boss who operated on the basis of respect and there was never a day when he wasn’t fair.

“He was as gracious at the end as he was at any stage of his life, fighting his illness with strength and courage. Michael was a man whose normality earned him hero status.”

Fellow Newmarket trainer William Haggas said he regarded it as an honour and a privilege to have been asked to speak at the service. He added: “Michael was the most unselfish man you could ever wish to meet. He regarded Roger as the son he never had.”

Haggas referred to Jarvis’s particular success at Haydock racecourse over the years and the Lancashire track was the scene on Saturday of a poignant victory when the Roger Varian-trained Oojooba won the mile maiden on debut. Her dam Ameerat won the 1,000 Guineas for Michael Jarvis and his long-standing patron Sheikh Ahmed Al Maktoum. 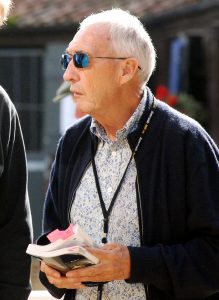