Trainer Brian Ellison made a mob-handed trip to Haydock more than worthwhile when landing Saturday’s valuable Betfair Chase Series Final with Sound Accord and swiftly following up with a Hurdle Final victory for Hada Men.

Eleven-year-old Sound Accord narrowly got the verdict over Zitenka when rallying to take the lead after the last having been hampered around the final bend. His neck victory scooped his owner Zuzka Hatcher £32,490, while another Ellison-trained runner, Bocciani, took third place and netted £4,770.

The same lucrative winner’s prize was taken home by Hada Men, who runs in his trainer’s colours and scored by a length and a half over Cloudy Bob to record his second success over hurdles.

Ellison fielded another six of the runners in the race – Andreo Bambaleo, Dusky Bob, Union Island, John Forbes, Simonside and Dontpaytheferryman – and took fourth place and another £2,385 with Andreo Bambaleo. 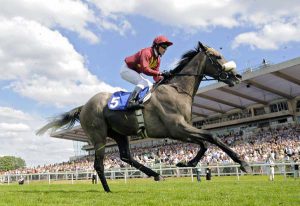 Up Next
Manighar records historic treble