Slow-burner vows to ride beyond 50
News

It has been revealed that Challow Novices’ Hurdle winner, Messire Des Obeaux, is likely to miss the 2017/18 jumps season after sustaining a tendon injury last week at Aintree.

The news was reported by co-owner, Simon Munir, on twitter during Wednesday morning.

He said: “Messire Des Obeaux sustained a tendon injury at Aintree [and] he will probably miss all of next season, we hope to bring him back 2018/19.”

One of Alan King’s leading novice hurdler’s this season, the five-year-old enjoyed a great start to his 2016/17 season notching three wins in a row.

The last of those successes came in the Grade 1 Challow Novices’ Hurdle at Newbury at the end of December. That day he saw off the Gordon Elliott-trained Baltazar D’Allier by a comfortable two-lengths.

After a defeat in the Sidney Banks at Huntingdon, when conceding his Grade 1 penalty, he then turned up in the Neptune Investment Management Novices’ Hurdle and finished four-lengths behind Willoughby Court in third.

At the Aintree Grand National meeting last week, the son of Saddler Maker ran a cracker behind the unbeaten Colin Tizzard novice Finian’s Oscar in the Mersey Novices’ Hurdle to finish third.

Subsequent to the race it was discovered that he picked up the tendon injury.

His trainer hadn’t held back on his regard for his charge, and in co-operation with owners Munir and Isaac Suede, a novice chase season looked to be the plan next season although this will now be pushed back a year.

He will probably miss all of next season

Speaking after his Grade 1 win in December, King said: “I’ve said all the way through that the one thing I’m really excited about is him seeing a fence next season.

Tendon injuries have been a prominent feature this jumps season with arguably King George winner Thistlecrack being the most high-profile sufferer. 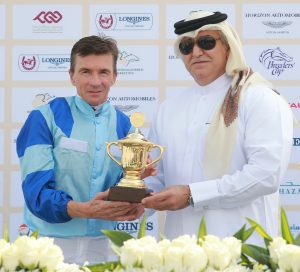 Up Next
Slow-burner vows to ride beyond 50