Kelly bounces back to Grade 1 triumph

History maker Lizzie Kelly notched the second Grade 1 of her career by partnering her old adversary Tea For Two to success in the Betway Bowl Chase.

The eight-year-old gelding unseated Kelly at the second in the Gold Cup last month but made amends in no uncertain terms.

A quality field of seven were taken along by Bristol De Mai in the early stages with Tea For Two and Gigginstown’s Empire Of Dirt held up towards the rear.

As the screw was turned coming down the back for the last time, Cue Card took up the running under Paddy Brennan and led into the straight.

All the while Tea For Two reduced the deficit and narrowly led between the last two. A good jump at the last put Tea For Two a length up and a rallying Cue Card was denied by a neck at the winning line.

“We were quietly confident going into the Gold Cup but our dreams were taken away from us,” reflected Kelly.

“He’s a horse that has produced it time and time again for me and my family. It was a dream ride I wasn’t sure how he was travelling but he’s just class.”

A son of Kayf Tara, Tea For Two secures his second Grade 1 over fences, with the first having come in December 2015 under Kelly in the Kauto Star Novices’ Chase.

Jane Williams, co-owner and Kelly’s mother, said: “I spent three-quarters of the race in the car park, trying to hide.

I spent three-quarters of the race in the car park, trying to hide

In the hands of a returning Barry Geraghty, the Phillip Hobbs-trained four-year-old led approaching the last and was pushed out to beat Divine Bere by a length and a half.

The New One and Sam Twiston-Davies set honest fractions up ahead but were no match for Geraghty’s mount who ran away to win the contest by five lengths. 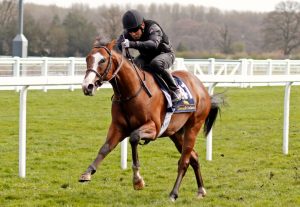