The going may have been heavy but Paul Hanagan’s spirits were soaring after riding his first British Group 1 winner aboard David Armstrong’s homebred Mayson for his old boss Richard Fahey. 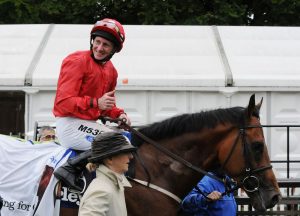 The champion jockey, who signed up as retained rider for Sheikh Hamdan Al Maktoum this season, moved from Yorkshire to Newmarket with his new job but his two worlds collided as the Malton-trained runner landed his first top-level success in the Darley July Cup.

The Invincible Spirit four-year-old clearly relishes his trips south to Newmarket as he won the Listed Abernant Stakes followed by the Group 3 Palace House Stakes on the Rowley Mile this spring. He was up on the pace from the start in the July Cup before cruising into a clear lead a furlong into the race and running home dourly to win by five lengths from The Cheka. Last year’s Golden Jubilee Stakes winner Society Rock was another length back in third and Australian challenger Ortensia posted a good effort in unsuitably soggy conditions to take fourth.

“It is a big weight off my shoulders to win this,” said Hanagan, whose only other win at Group 1 level came on another Fahey-trained runner, Wootton Bassett, in the Prix Jean-Luc Lagardere at Longchamp in 2010.

“I have been champion jockey twice and it is nice to get up there and win the top races like this. That was like riding my first winner all over again. It was such a good buzz and I want more of it now.”

Hanagan was bouncing back from a bad fall at the same course just a fortnight ago, which saw him leave the track on a stretcher and miss a week of action.

Bred in Lancashire by Armstrong under the name of Highfield Farm, Mayson is the first and only foal of the unraced Pivotal mare Mayleaf, who died when her subsequent Group 1 winner was just three months old. 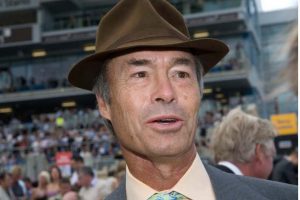 Up Next
George Strawbridge: the drugs don’t work