The British Horseracing Authority (BHA) says it is “listening to jockeys’ concerns about the new whip rules” and pledges to consider any submission made on the matter by the Professional Jockeys’ Association (PJA). The two organisations will now meet on Monday and the planned strike action by jockeys at Monday’s two Flat meetings has been abandoned.

A statement from the BHA on Friday, the second the authority has been forced to issue in consecutive days following Richard Hughes’s surrender of his licence and mounting bans for riders, also maintained that the current rules will not be suspended ahead of further talks.

The statement continued: “We do commit to resolving this matter as quickly as possible while ensuring that due process is followed. In light of the positive dialogue taking place between the BHA and the PJA we urge everyone involved in racing to engage with this process and to work with us to take the sport forward with no disruption to the racing programme.”

As the controversy surrounding the introduction of the new whip rules threatened to undermine Britain’s richest day of racing at Ascot on Saturday, Racehorse Owners Association President Rachel Hood said: “Along with the rest of racing, the ROA is extremely disappointed that the new whip rules have led to this controversy, especially at a time when the racing world should be basking in the positive publicity of British Champions’ Day.

“We very much hope the jockeys will pull back from taking action until the BHA and PJA can meet. Such a meeting must take place immediately and must be conducted in a climate where the jockeys’ concerns are listened to and acted upon.

“The PJA’s Chief Executive Kevin Darley is a very reasonable man who understands the importance of balancing the anxiety of his members with the requirements of racing’s regulator. We, as fellow horsemen, support him in his endeavours to find a quick solution to what has already become a damaging dispute.” 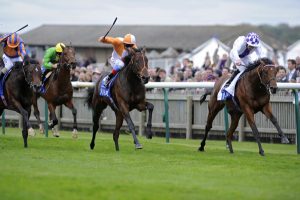