Pied Piper and Knight Salute also shared the spoils in a dramatic Jewson Anniversary 4-y-o Juvenile Hurdle, only for the placings to be reversed

Clan Des Obeaux bounced back to his brilliant best in first-time blinkers at Aintree on Thursday to make it back-to-back wins in the Grade 1 Betway Bowl.

The multiple Grade 1 winner, a stalwart of Paul Nicholls’ yard, had had a season of mixed fortunes prior to Thursday, running with great credit when second in the King George VI Chase at Christmas before turning in an underwhelming third in the Denman Chase at Newbury.

Equipped with blinkers, however, he was a different horse on Thursday, jumping and travelling with zest to take it up off the long-time leader Kemboy at the third last. Asked for maximum effort by jockey Harry Cobden, the Kapgarde gelding opened up a healthy advantage and although that was whittled down by the strong finishing effort of Conflated, Clan Des Obeaux still had enough in reserve to keep that rival at bay by a length. Kemboy was another eight lengths away in third.

“He had blinkers on, and he was on form today. The only one he missed was my fault. He’s getting older now, he doesn’t have too many days left but if he keeps coming back like this….he’s amazing. We all like good horses but one who is so kind and easy like him makes it a bit more special. He’s a pleasure to ride.”

It was Clan Des Obeaux’s fifth win at the top level and one that pushed his earnings past the £2million mark. 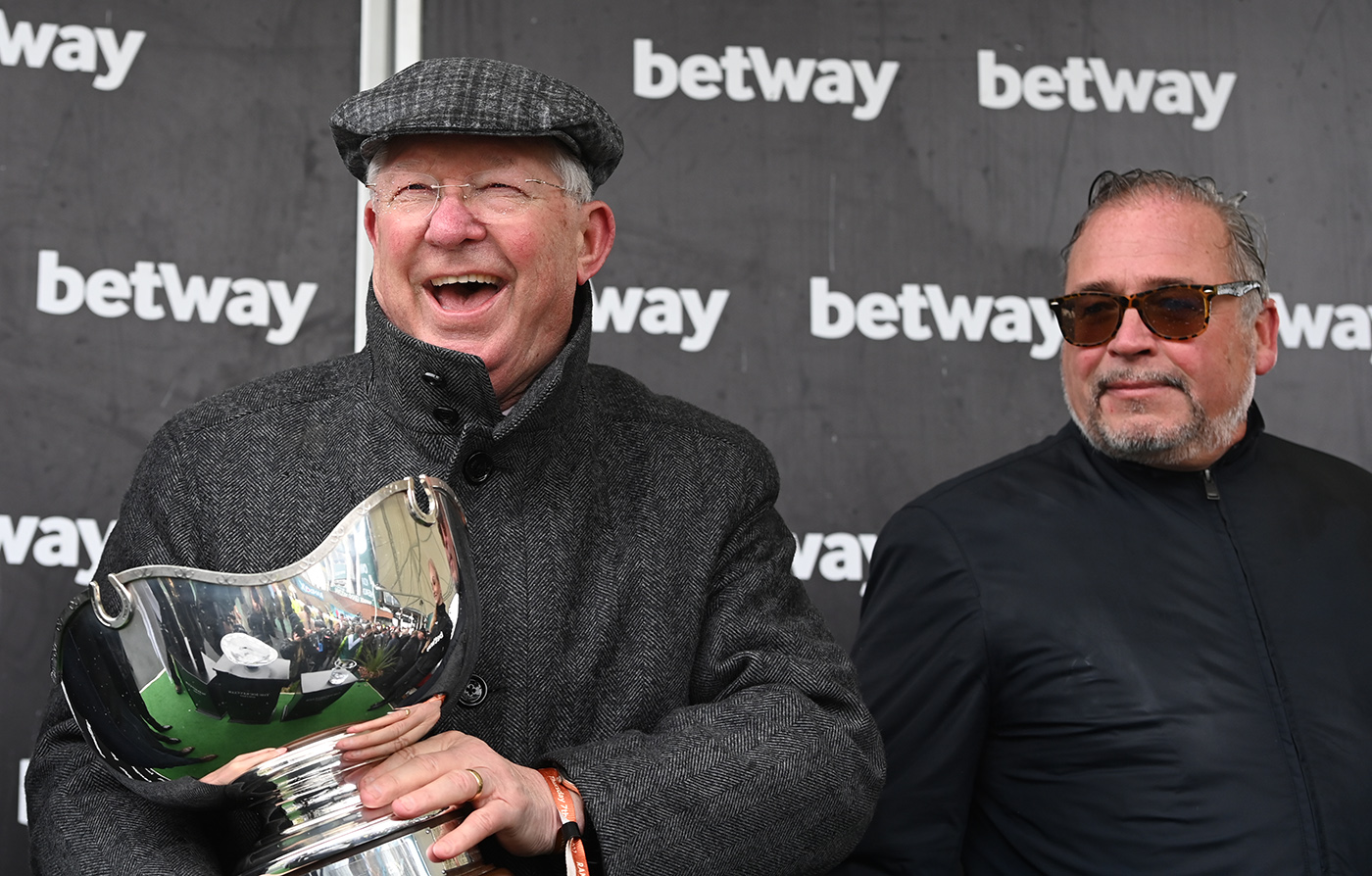 A final flight fall by Zanahiyr gifted Epatante a seventh Grade 1 victory in the Aintree Hurdle.

Nicky Henderson’s popular mare had been smuggled into contention by Aidan Coleman and having been produced to take it up alongside Zanahiyr approaching the final flight, looked the likely winner as her rival crashed out to her left. That left Epatante with an unassailable lead and she only had to be kept up to her work to score by 14 lengths from Monmiral in second and McFabulous in third.

“She’s sweet as a nut,” Coleman told ITV Racing. “She’s had a fantastic year. Nicky is an unbelievable trainer – you don’t need me to tell you that. She wasn’t at her best last year and he’s got her back this year to arguably her best form. Mares have been super to me throughout my career and she’s just been a queen.”

Celebrating his fourth win in the race, owner JP McManus said: “It’s marvellous. It’s a great performance by Nicky to have her in this shape after the Champion Hurdle [when second to Honeysuckle]. Nicky was very happy with her preparation and she delivered. I’m very pleased.” 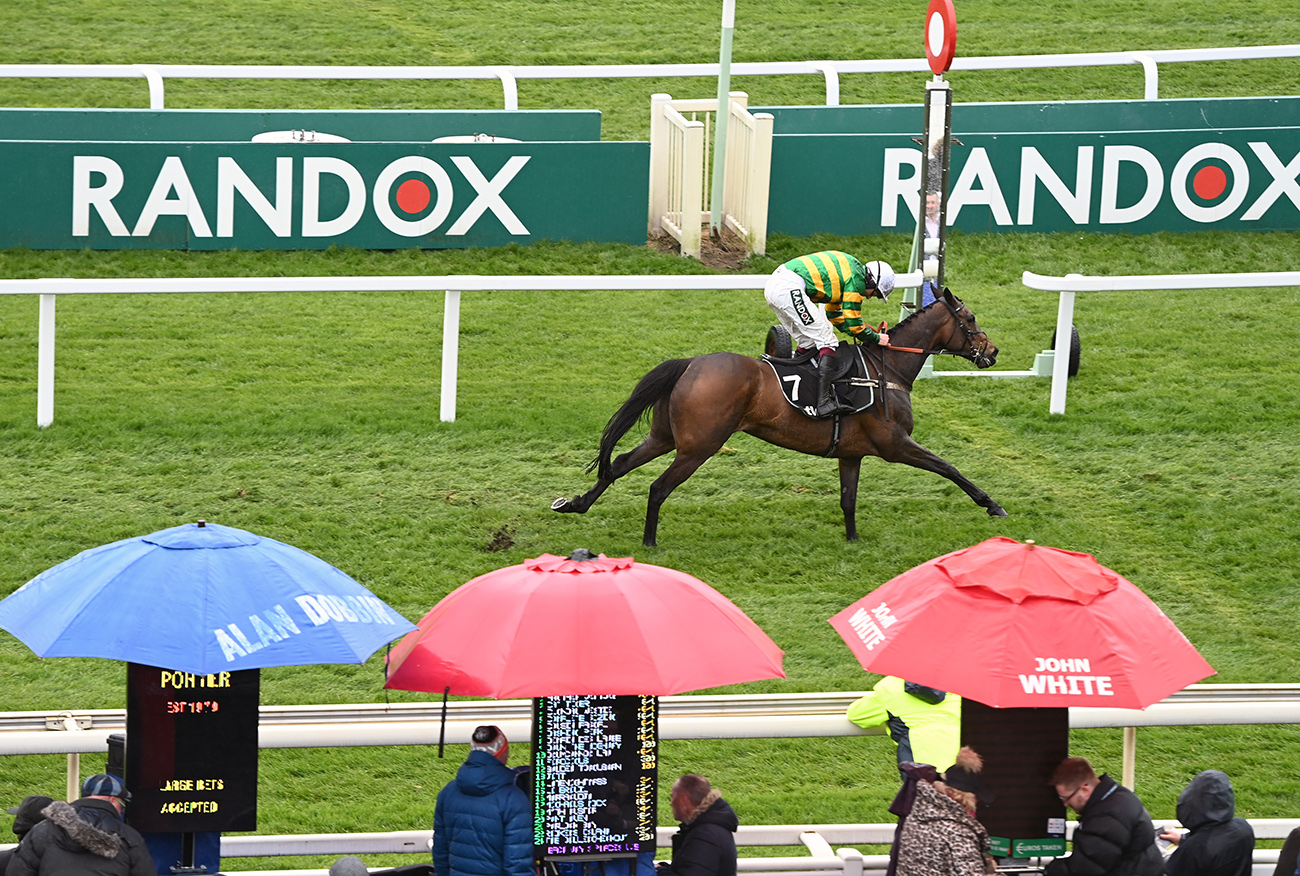 Epatante is out by herself in the Aintree Hurdle. Photo – Bill Selwyn

In finish for the ages, Pied Piper and Knight Salute shared the spoils in a dramatic Grade 1 Jewson Anniversary 4-y-o Juvenile Hurdle.

Gordon Elliott’s Pied Piper was sent off the 10/11 favourite having run a fine third in the Triumph Hurdle at Cheltenham. Milton Harris’ Knight Salute, on the other hand, lined up off the back of a disappointing showing in the same race and was priced at 14/1 as a result, despite having previously won the Adonis Juvenile Hurdle at Sandown.

Both travelled extremely well during the early exchanges of Thursday’s contest as Inca Prince set a brisk pace up front. Davey Russell had yet to move on Pied Piper as they swung into the lead heading towards the last but Knight Salute was still on the bridle for Paddy Brennan, travelling well in his slipstream. Pied Piper leaned to his left as he jumped the last, slightly impeding Knight Salute in the process, and from then on, the pair were locked in battle, with both horses answering every call. Knight Salute had the upper hand five yards from the line but Pied Piper’s nose was down when it mattered; at the line, the judge was unable to split them.

For Harris, it was a memorable first Grade 1 – and achieved with a horse purchased for just 14,000gns by Mark Adams at last year’s Tattersalls July Sale.

Yet the drama was far from over. With the final flight coming under scrutiny, a stewards’ enquiry was called and the placings reversed.

“That doesn’t sit well with me,” Harris later told ITV Racing. “It’s not the way I like to play sport. It was a good battle and it’s a shame to see someone demoted.

“Listen, I’m glad to be here though – we’re better off than the people in Ukraine aren’t we? Life’s ok.”

Owned by the Four Candles Partnership, Knight Salute was bred in Britain by Willie Carson’s Minster Stud and Mrs Hugh Dalgety. The Flat-bred son of Sir Percy is out of Shadow Dancing, who was third in the 2002 Oaks for the same connections. 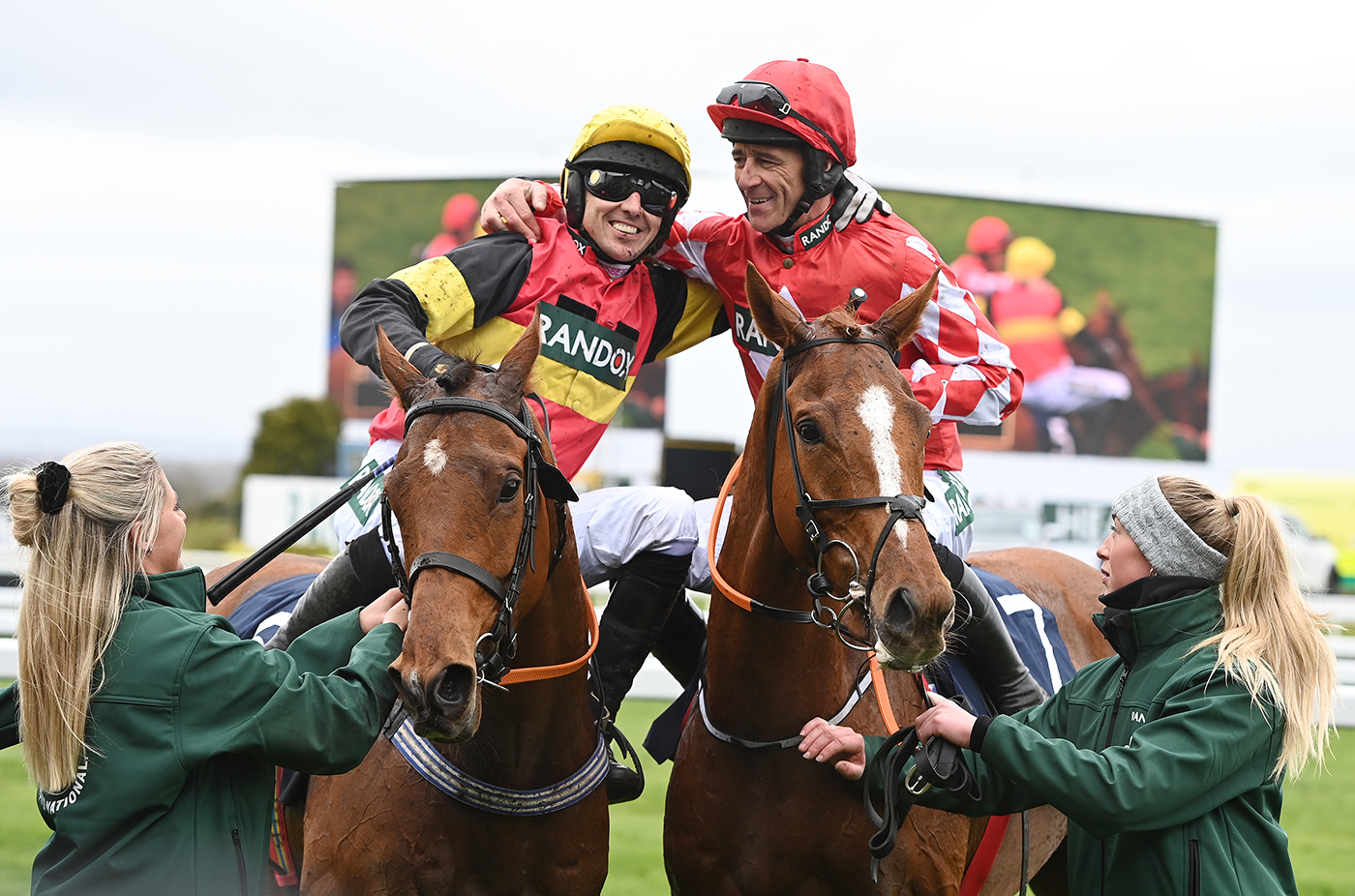 Pied Piper and Davy Russell (right) and Knight Salute and Paddy Brennan shared the spoils before the placings were reversed. Photo – Bill Selwyn

Millers Bank put a frustrating season behind him with a career best to hand trainer Alex Hales and jockey Kielan Woods a first Grade 1 victory in the SSS Super Alloys Manifesto Novices’ Chase.

The gelding had run a good third in the Aintree Hurdle at this meeting last year but after having made a winning debut over fences at Huntingdon, went on to unseat in his next two starts. Following wind surgery, he got back on track with a second to Pic D’Orhy but with that rival, not to mention Arkle third Erne River, in competition at Aintree, was sent off a 7/1 shot to oblige on Thursday.

Neither one of those rivals shone, however, with Erne River coming down at the tenth and a scratchy round of jumping putting paid to the chances of Pic D’Orhy, who was ultimately pulled up.

Millers Bank, meanwhile, had been ridden with great patience by Woods and having been produced between The Widdow Maker and War Lord at the last fence, put in a surging run to put daylight between himself and the field to win by ten lengths. War Lord was second, five ahead of The Widdow Maker in third.

Millers Bank is the first foal out of his dam, the unraced Karinga Bay mare It Doesn’t Matter. The mare is also dam of Bourbon Beauty, winner of the Grade 2 EBF BetVictor ‘National Hunt’ Novices’ Mares’ Hurdle at Newbury.

“It’s quite emotional, just wonderful really,” Hales told Racing TV. “It’s taken a long time for us to get here, it’s massive team effort. We’ve worked so hard for so long to find horses like this, and to do it here at Aintree is wonderful.

“I bred him too, so quite an incredible story really. I owned the mare, chose the stallion Passing Glance and I’ve just believed in him.” 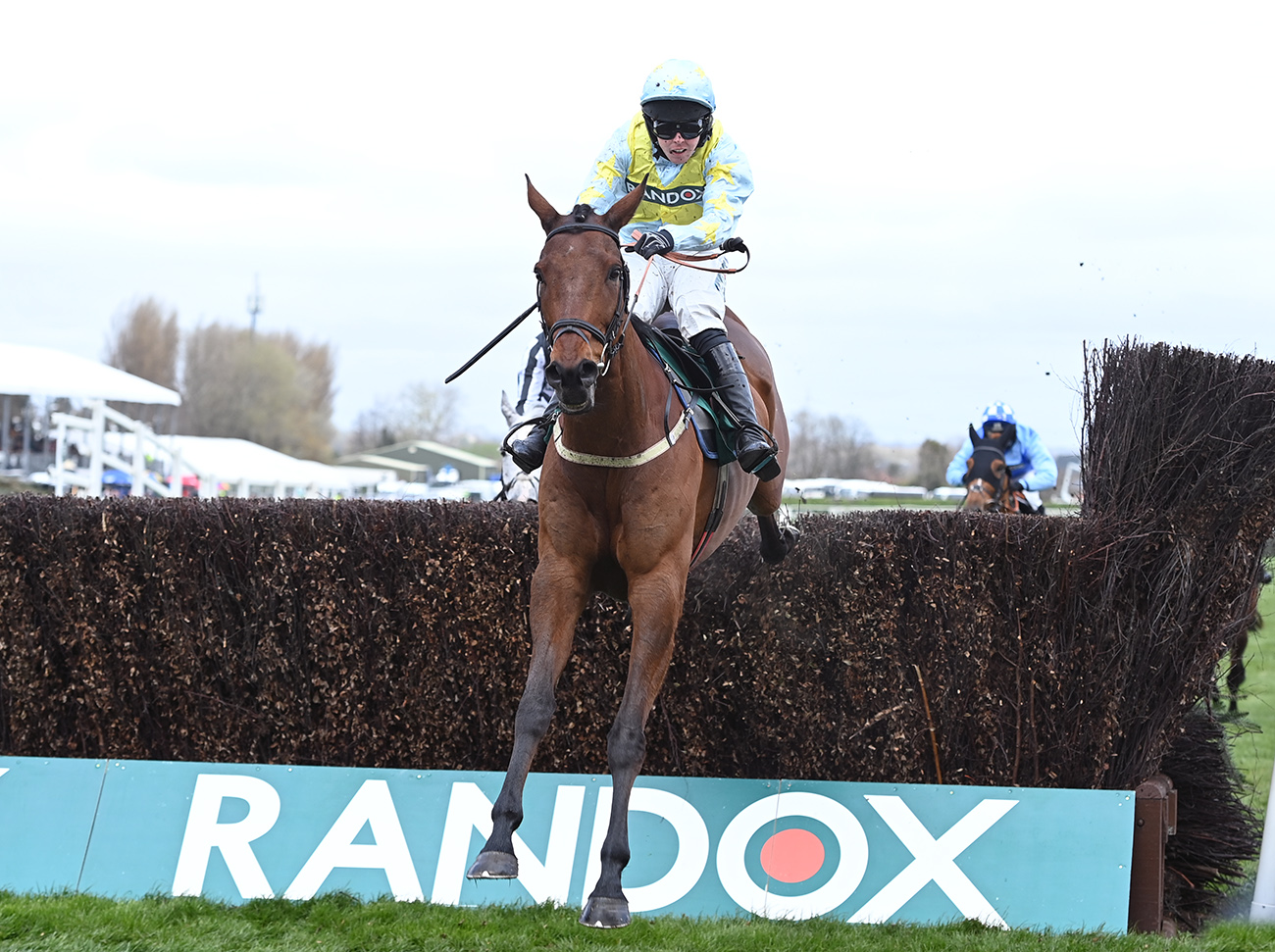 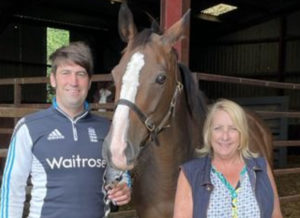 Up Next
Outstanding season continues for Williams at Ayr