Having bypassed this month’s Blue Riband at Epsom, Martyn Meade’s Lone Eagle looked to have the contest sown up when scooting away as they entered the home straight.

Meanwhile Hurricane Lane, who had been improving turning for home, continued to make rapid progress under jockey William Buick once overcoming trouble in running and his rapid turn of foot was enough to carry the three-year-old past Lone Eagle by a neck.

Aidan O’Brien’s Wordsworth finished seven lengths adrift of the pair in third while stablemate High Definition disappointed and could only finish tenth.

Buick, speaking to Racing TV, said: “This means the world to me. I must give credit to Charlie Appleby and the team at Moulton Paddocks at home.

“This horse has done nothing but improve – and he improved since Epsom. We all know that’s not an easy thing to do. I’m in a very privileged position and I must say that I thought halfway through the race that we’d given up our position behind Frankie [Dettori, Lone Eagle’s jockey], and I thought he’d get first run.

“Once I switched him out wide, he managed to get some clear running room and he took off. I was just praying I’d get the leader in time. He’s a very, very good horse.

“It means the world to me, but I have to give a massive thank you to the team at home and obviously His Highness Sheikh Mohammed as well. He puts so much into it. No one deserves it more than he does.”

Hurricane Lane’s victory in the Group 1 means that Godolphin have secured both the English and Irish Derby contests in the same season having triumphed with Adayar at Epsom, whom Hurricane Lane had finished third behind.

Appleby, also speaking to Racing TV, added: “I couldn’t have been any happier coming into the race. I felt that he gained experience at Epsom. He surprised me at Epsom as I thought he would travel better but inexperience showed around there.

“It was noticeable after Epsom how he’d grown up, his work was sharper. The only negative today was the ground tightening up over the last 24 hours and coming down the hill William came under the pump a bit.

“Once he met the rising ground again, I was confident that he would gallop all the way to the line.

“I thought that Frankie had stolen a march and he’d be a hard horse to peg back, but I knew our horse would keep galloping to the line.” 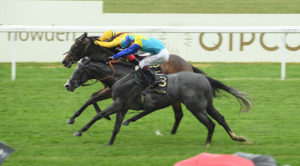 Up Next
Dragon Symbol team to appeal Commonwealth Cup result