Homeless Songs ran out the brilliant winner of the Irish 1,000 Guineas at the Curragh on Sunday, storming from the back of the field under Chris Hayes to hand trainer Dermot Weld a fifth success in the race, 40 years on from his first.

Highly impressive when successful on her seasonal debut in the 1,000 Guineas Trial at Leopardstown last month, Homeless Songs again put her smart turn of foot to good use, travelling sweetly into contention before kicking clear for a five-and-a-half length victory. Left trailing in her wake was the favourite Tuesday, who overhauled pacesetter Agartha in the closing stages to take second, half-a-length ahead of her staying-on stablemate Concert Hall in third.

Weld had opted to bypass the Newmarket and French 1,000 Guineas with the filly and was satisfied that the decision had reaped such a spectacular reward.

“I always had the highest confidence in her and wasn’t prepared to run her until she was right and had the conditions – it was beautiful ground here at the Curragh. She has the Group 1 pace to win over 6 furlongs, the question was whether she would stay a mile and this was the best place to find out. Chris gave her an excellent ride, I was very pleased to see her relax beautifully for him.

“We’ll see how she comes out of the race, I’ll speak with Eva [Haefner, owner of Moyglare Stud Farm] but obviously the Coronation Stakes will be considered. She’s lovely filly to train – I’d say she’ll be around next year too.”

For owner-breeder Moyglare Stud Farm, Homeless Songs represents six generations of breeding as a direct descendant of Grade 1 Acorn Stakes heroine Aptostar, purchased by the stud for $750,000 at Fasig-Tipton’s November sale in 1989. The daughter of Fappiano went on to breed seven winners; none were in her league but her first foal, the Sadler’s Wells filly In Anticipation, became an outstanding producer, notably as the dam of Ribblesdale Stakes winner Irresistible Jewel (dam of Irish St Leger winner Royal Diamond and Irish 1,000 Guineas runner-up Mad About You) and Listed scorer Diamond Trim. In turn, Diamond Trim foaled Majestic Silver, whose Listed-winning daughter Joailliere is the dam of Homeless Songs.

Homeless Songs is the second foal out of Joailliere following the Listed scorer Reve De Vol. The mare also has a two-year-old colt by Sea The Stars named Time Tells All, a yearling colt by Frankel and was sent to St Mark’s Basilica this season.

Homeless Songs is another feather in the cap for last year’s champion sire Frankel. She becomes the 21st Group or Grade 1 winner by the star Juddmonte stallion and joins Classic prospects Onesto, Nashwa, Hidden Dimples, With The Moonlight and Westover as stakes winners of recent weeks.

Fresh from celebrating victory in the German 2,000 Guineas courtesy of Maljoom, William Haggas’ outstanding run of form went on to extend into Ireland, with his yard’s four-year-old stalwart Alenquer coming out on top in a thrilling finish to the Tattersalls Gold Cup.

In a deep renewal that consisted of five Group 1 winners, the Aidan O’Brien-trained High Definition was allowed his own way out in front under Ryan Moore and appeared to be on the cusp of finally vindicating his tall home reputation with a strong kick that placed all his rivals under pressure. Lord North and Alenquer, both of whom had made progress from midfield, hooked up in pursuit as State Of Rest was wound up by Shane Crosse on the outside for his run. With each under hard driving, the trio made relentless progress to get within striking distance of the leader, with the staying power of Alenquer ultimately proving decisive in victory.

At the line, he had a head to spare over High Definition, himself a neck in front of the closing State Of Rest.

“That was a super performance,” said Marquand, celebrating his first winner at the Curragh. “He had to dig really deep. To get it done today for him was fantastic and it’s a testament to his attitude that he got his head down like that on the line.

It was a breakthrough first Group 1 success for Alenquer, who had looked a top-flight performer in the making last year when successful in the King Edward VII Stakes at Royal Ascot and again in February when breaking the track record at the expense of Lord North in the Winter Derby at Lingfield Park.

A son of the much-missed Adlerflug, Alenquer was bred in Germany by Gestut Romerhof out of the winning Areion mare Wild Blossom. He was a 80,000gns Tattersalls October Book 1 yearling purchase by Armando Duarte on behalf of owner MM Stables. 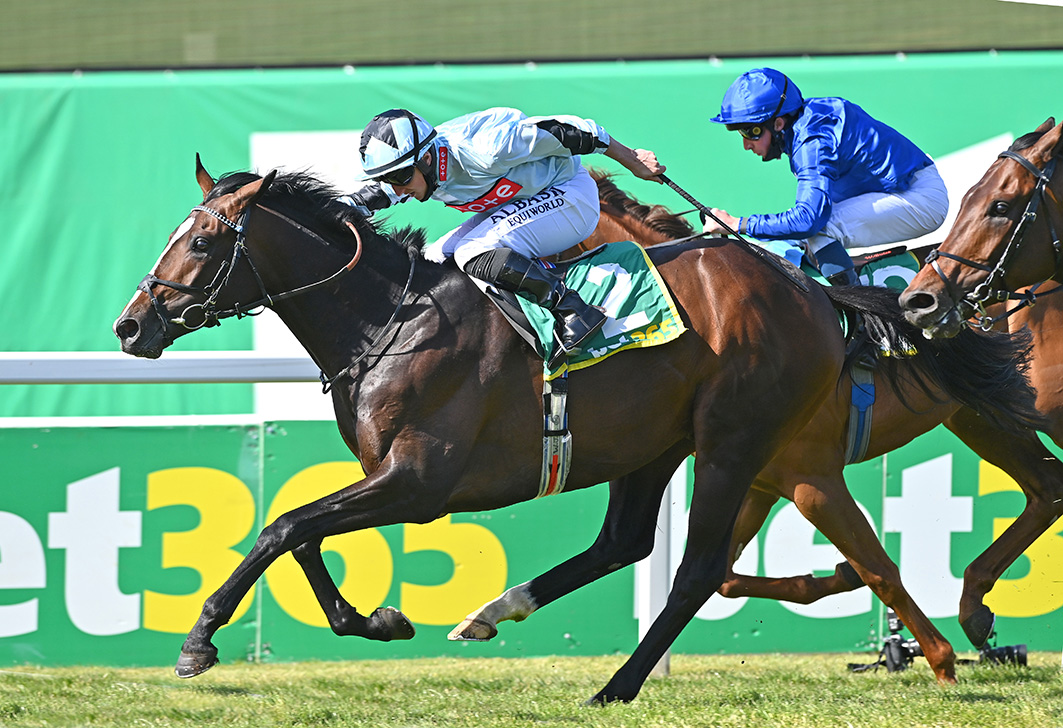 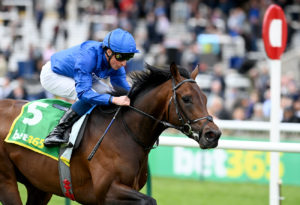 Up Next
Irish 2,000 Guineas victory for Native Trail