Deirdre springs a surprise in the Nassau
News

Hong Kong jockey, who rode in Britain last year, is part of the Rest of the World team at Ascot

Fresh from enjoying a career-best season in Hong Kong, jockey Vincent Ho insists it is a privilege to be competing in Saturday’s Dubai Duty Free Shergar Cup at Ascot as part of the Rest of the World team.

Ho is one of 12 jockeys who will take part in the Shergar Cup, where four teams of three riders compete for points during six races on the card. Whichever team out of Great Britain & Ireland, Europe, the Girls and the Rest of the World scores the most points, will lift the trophy.

“I was very surprised to be invited to take part in the Shergar Cup, but I’m really looking forward to it and to race against the best jockeys in the world,” said Ho. “To be able to ride at a track like Ascot, which has such a long history, is going to be an amazing experience.”

Ho enjoyed 56 victories in the recent Hong Kong season and returned to Britain three weeks ago to prepare for the unique competition by once again linking up with Middleham trainer Mark Johnston, for whom he has already ridden two winners this summer.

Ho made his debut in Britain last year during the Hong Kong off-season and he revealed how the opportunity to ride for the Middleham maestro came about.

“Ryan Moore helped me to link up with Mark,” said Ho, who was speaking at a media event ahead of the Shergar Cup. “I’m very grateful that Mark gave me a lot of support and had me in his yard so I could learn from him.

“I was able to ride in a few different races to learn about British racing and the horses here, as it’s very different to how we race in Hong Kong. Horses in England tend to pick up a lot earlier and in Hong Kong we don’t have that same level of pick-up unless you’re on a horse like that.

“My plan is to learn as much as I can this summer and go back to Hong Kong stronger. One of the main things in Hong Kong is being able to find good horses to ride and to stay on them, which sometimes is not an easy task.”

Ho, who won the Tony Cruz Award for being the leading local jockey in Hong Kong last season, insists he does not think about the numbers when he is riding but highlights his ambitions going forward.

“My main goal is to win international Group 1s in Hong Kong and across the world – every jockey dreams of [that]. There’s still a long way to go and plenty for me to learn before I achieve that.”

Joining Ho in the Rest of the World team are Australian native Mark Zahra and leading Japanese jockey Yuga Kawada, who is not only making his debut at the Shergar Cup but will also captain the team.

Kawada is hoping he can bring more success for Japan on the international stage following Deirdre’s victory in the Nassau Stakes at Goodwood last week. He said: “It was a huge moment for Japanese racing with Deirdre especially at a track such as Goodwood, which is unlike anywhere in Japan.

“It showed we can run good races anywhere. I’m proud to be representing Japan at Ascot on Saturday and I’m here to do my best.”

Kawada will be joined by fellow Japanese rider Nanako Fujita, part of this year’s Girls’ team, who has become a rising star of the jockey ranks having broken a number of records as an apprentice in her home country.

Fujita, who was the winner of the third edition of the Women Jockeys’ World Cup at Bro Park in Sweden in June, said: “I am very pleased to be able to participate in such a prestigious event as the Shergar Cup.

“The Women Jockeys’ World Cup was a really good experience and to win it was a really big thing for me. Riding overseas has been a great development for my career.” 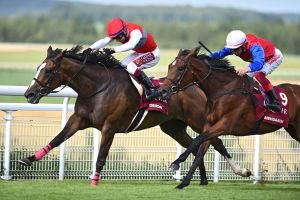 Up Next
Deirdre springs a surprise in the Nassau