Greaneteen lowers colours of Altior in Celebration Chase at Sandown

Altior proved no match for Greaneteen as Paul Nicholls’ charge was an easy winner of the Grade 1 Bet365 Celebration Chase at Sandown on Saturday.

Nico de Boinville had opted to make the running on Altior, who was sporting cheekpieces for the first time, and while the rest of the field were happy to allow the multiple Grade 1 winner an early lead, Greaneteen gave chase as the race reached its climax.

Under Bryony Frost, Greaneteen nipped up the inside of Alior after the pond fence and once finding daylight, pulled clear to win by three and three quarter lengths, with a further 12 lengths back to Sceau Royal in third.

Frost said: “He was awesome, it’s all about getting him to settle and then he goes forward. He’s always progressing, and he’s always overlooked, Harry [Cobden] gave him a fantastic ride in the Queen Mother to only just be beaten and again he was overlooked today. We carry on our 100 per cent strike-rate.

“He’s brilliant, he kept on. I knew I had to go and hunt down Altior as he looked on a real going day and I thought the only way I could really get to him is by going down the hill not using too much petrol and let my horse travel. He’s jumped brilliantly, he’s economical. He’s going to be a proper horse over two and a half miles.

“I have to say I was quite frustrated because I couldn’t get to 50 winners, it’s my personal best as a conditional. But I’d do it all over again for an hour like this.”

Frost was referring to having earlier guided Frodon to victory in the Grade 2 Oaksey Chase, holding off Mister Fisher to win by a neck.

The jockey has now partnered Frodon to nine of his 17 wins and she added: “This horse is somebody else, isn’t he? What an amazing athlete he is. He might not be the best and he might not be unbeatable but you have to admire his bravery and enthusiasm.

“My question was, would he enjoy letting himself down on this ground, but Sandown have done a great job to make it safe.

“What a battle! Mister Fisher was all over us but this lad won’t go down without a fight. When you have a partner like that it makes you as brave as a lion.”

Paul Nicholls added: “He’s an amazing horse, it’s been a real challenge getting him ready for today. He was obviously pretty exhausted after Cheltenham. He probably had as hard a race as anything did at Cheltenham.

“He battled really strongly from the back of the last and he obviously stays so well, he just got himself back up on the line. It’s nice to win a nice race at the end of the season.” 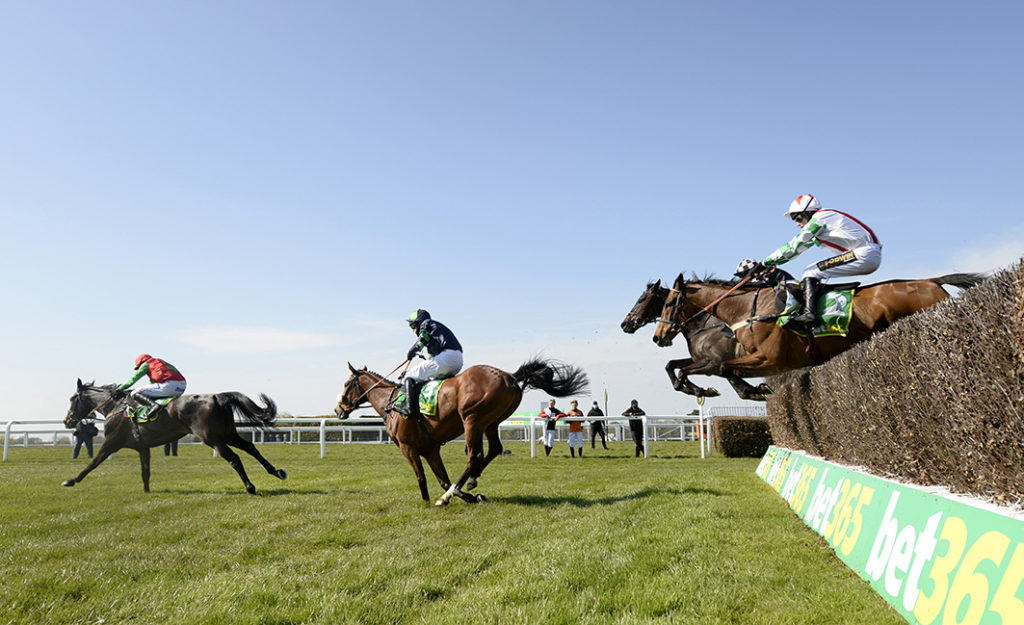 Potterman (white) jumps a fence during the Bet365 Gold Cup with Enrillo leading. Enrillo finished first past the post but was placed third due to causing interference – Photo: Bill Selwyn

An eventful edition of the Bet365 Gold Cup saw Potterman awarded the spoils in the stewards’ room after it was deemed that first past the post Enrilo had drifted left and caused interference with the horse that had crossed the line in second.

Having jumped the final fence in front, Enrilo’s lead was faltering as he went up Sandown’s hill causing him to veer left and stop the challenge of both Potterman and Kitty’s Light who finished third.

But the stewards at Sandown ruled the interference was significant and demoted Enrilo to third before promoting Potterman and Kitty’s Light to first and second respectively.

Potterman’s trainer Alan King said: “The plan was to give him a prep, but we ran out of time. I haven’t seen the head on, but my view was that if it was in France, we would definitely get it. I know it’s not the same here, but I’m certainly not going to complain.”

The Kim Bailey-trained Younevercall was victorious in the Grade 2 Bet365 Select Hurdle for the second time when holding off the resolute Indefatigable to win by half a length. The ten-year-old had won this race back in 2019. 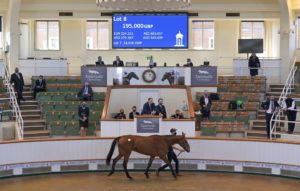