Crack speedster Golden Horde has the chance to emulate his sire Lethal Force with victory in the Group 1 July Cup at Newmarket on Saturday.

Lethal Force struck in the 2013 for trainer Clive Cox and jockey Adam Kirby, the same combination that masterminded Harry Angel’s success on the July Course in 2017.

Golden Horde is of course trained by Cox and is the leading light to have emerged from Lethal Force’s time at Cheveley Park Stud before his transferral to Haras de Grandcamp in France for this year’s breeding season.

The three-year-old was last seen holding off American raider Kimari to land the Group 1 Commonwealth Cup at Royal Ascot and his trainer, speaking to QIPCO British Champions Series, said: “I’m thrilled we have a horse of this calibre to follow in the same footsteps as the likes of Harry Angel and Lethal Force.

“He really grew into his frame and strengthened from two to three and has been in great nick since Ascot. The fact we’ve got the Commonwealth Cup now is a huge plus as we didn’t really have any stepping stones for the three-year-old generation prior to this.

“It shows Golden Horde is at the top of the tree as far as the three-year-old generation is concerned and I think the helpfulness of the weight-for-age scale, which is a tried and tested formula, is proving that they are a potent force at this particular stage.

“He’s pretty uncomplicated. He can make his own running or take a lead. I don’t have any particular concerns on that score. The draw is always important wherever you are, but I would hope we could fathom our tactics out quite simply. I hope we don’t get too much rain, although he’s shown he can cope with ease in the ground.”

Golden Horde’s opponents in the 7f contest include the Kevin Ryan-trained Hello Youmzain, last seen winning the Group 1 Diamond Jubilee Stakes at Royal Ascot last month, and 2,800gns bargain buy Sceptical, who will be ridden by jockey Frankie Dettori as he searches for an elusive first victory in the July Cup.

Newmarket’s Saturday card also includes the Group 2 Superlative Stakes and has attracted the participation of Mecca’s Angel’s first foal Hudson River, who caught the eye with a one and a half length success on debut at the Curragh last month. 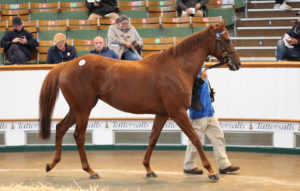