Some titanic battles between the two big traditional superpowers, Godolphin and Coolmore, were the main talking points of a solid renewal of Book 1 of the Tattersalls October Yearling Sale in Newmarket.

Between them, Sheikh Mohammed’s Godolphin and MV Magnier accounted for each of the top eight lots and 22% of gross sales overall. Shadwell Estates also played an important role in the fortunes of the sale as the buyer of 19 yearlings worth 7,175,000gns as did Sheikh Mohammed Obaid al Maktoum, who made a series of high-profile buys through Kevin Ryan and Roger Varian.

Beyond the top end of the market, however, trade was not always easy going for some vendors. To that end, the importance of various American buying interests, notably agent Mike Ryan, cannot be understated.

Previous buying trips for Ryan alongside trainer Chad Brown and owners Peter Brant, Klaravich Stables and E-Five Racing had yielded Graded stakes winners such as Newspaperofrecord, Digital Age and Demarchelier from just a select group of runners. Buoyed by that success, Ryan and his owners returned to Park Paddocks fully armed to ultimately spend close to 8 million guineas worth of stock.

Yet despite those reversals, Tattersalls could still take satisfaction from a sale that featured a top price of 3,600,000gns, the highest figure paid for a yearling colt worldwide this year, and ten million-guinea lots overall.

“There have been some spectacular highlights at Book 1 of the 2019 Tattersalls October Yearling Sale including two outstanding colts breaking the 3 million guineas mark, with the Dubawi colt out of Alina achieving the highest price for a yearling colt in the world this year,” said Tattersalls Chairman Edmond Mahony.

“In total we have had ten yearlings make one million guineas or more reflecting the extraordinary quality of the yearlings assembled for Book 1 and we have welcomed buyers from throughout the world, all of whom are drawn to the sale by its unrivalled reputation as Europe’s premier yearling sale.

“After eight consecutive years of growth with turnover rising from 51 million guineas in 2011 to last year’s massive 106 million guineas, the aggregate has fallen a little short this year, but the sale has still produced turnover in excess of 100 million guineas which is the third highest in the sale’s history and yet again a huge tribute to the vendors who have brought the cream of the European yearling crop to Book 1 of the Tattersalls October Yearling Sale.

“We are fortunate to have so many of the world’s top stallions currently standing in Europe with five of them, Dubawi, Frankel, Galileo, Kingman and Siyouni all producing yearlings which have sold for a million guineas or more this week and there is no doubt that the global achievements of these stallions play a big role in attracting so many overseas buyers.”

In a scene of pure theatre reminiscent of some former sale ring days, Sheikh Mohammed and the Coolmore team engaged in some terrific battles for some of the better colts.

The Sheikh, bidding through Anthony Stroud, had the last say at 3,600,000gns for the sale-topping Dubawi colt out of Alina as well as the Frankel half-brother to Golden Horn, who made 3,100,000gns.

MV Magnier, however, came out on top for the Kingman colt out of One Last Dance, who was one of the highlights of the final day at 1,800,000gns.

The sale-topping colt is a half-brother to St. James’s Palace Stakes winner Barney Roy and was bred by the Australian-based Sun Kingdom out of Alina, a Galileo mare purchased by the breeder for just 65,000gns in 2012.

“He is a really athletic horse, a really good mover,” said Stroud. “Sheikh Mohammed picked him out and was his favourite [of the day]. Of course, we stand the sire Dubawi and the colt is out of a Galileo mare. 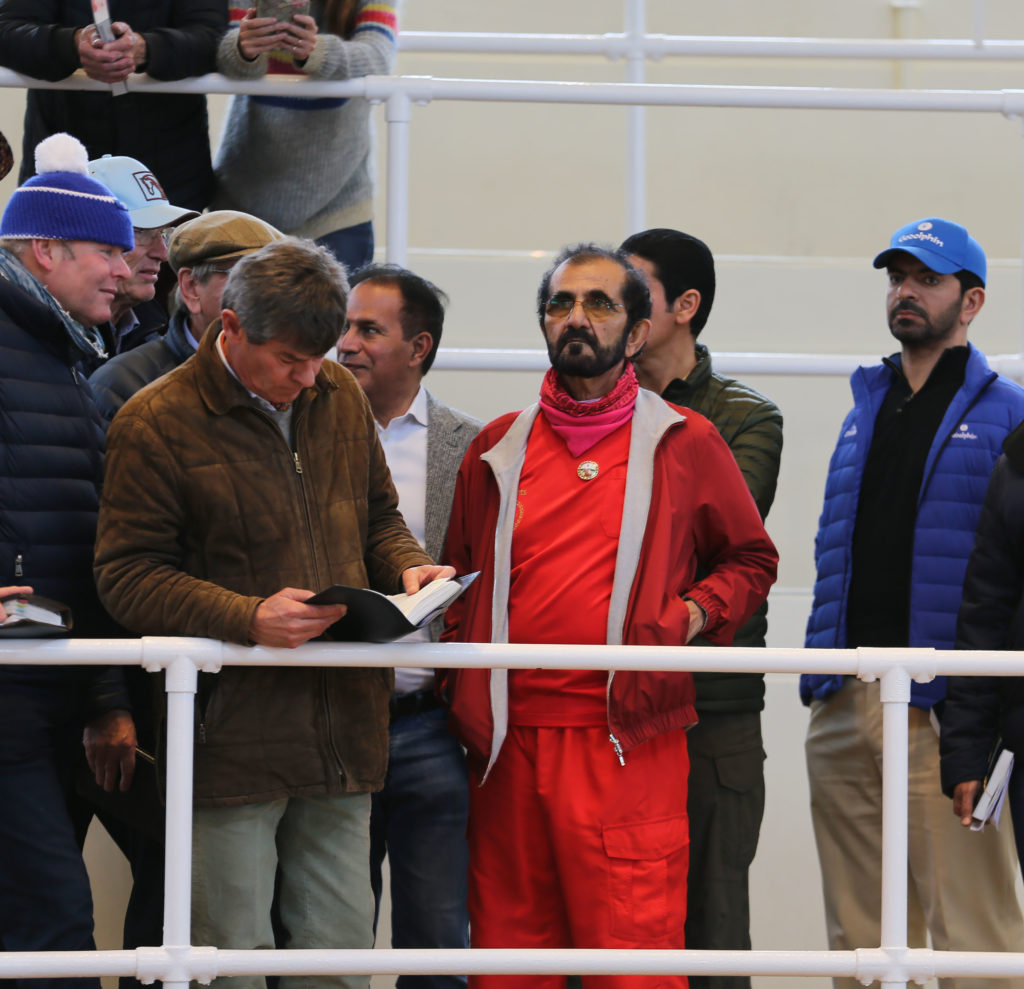 “Night Of Thunder is turning into a useful stallion and we also now have Too Darn Hot – the sire line is becoming very important and, of course, it traces back to Dubai Millennium, who was so important to Sheikh Mohammed.

“He cost more than we thought, but you need to go so far to get these sorts of horses.”

The colt was the highlight of an outstanding week for vendor Hazelwood Bloodstock, which later in the week also sold the Kingman colt out of One Last Dance. As a result, Adrian O’Brien’s operation ended the sale with an incredible average of 1,958,333gns for three sold.

A small but strong draft for Harry McCalmont’s Norelands Stud also yielded some terrific results, with the farm responsible for the 3,100,000gns Frankel half-brother to Golden Horn as well as a Siyouni half-brother to Magna Grecia, who will join his sibling in Ballydoyle after making 1,300,000gns to MV Magnier.

“I am not often lost for words, but I think I am now,” McCalmont said following the sale of the Frankel colt. “This is easily the best price we have had in the sales ring, the second-best we achieved this morning!

“I have to thank my team – they have done a fabulous job. There was a lot of interest in the Frankel, there were some serious people who liked him; however, you never know what is going to happen until you get to the ring.”

Nicholas Jones’ Coln Valley Stud also had a sale to remember courtesy of a homebred Kingman colt who made 2,300,000gns. The hammer again fell in Godolphin’s favour, although this time following a protracted battle with Phoenix Thoroughbreds.

The colt is out of fellow Coln Valley homebred Grace And Favour, a half-sister to Fame And Glory from the further Plantation Stud family of Grimpola also responsible for Farhh.

📖 A fantastic result for Coln Valley Stud as their stunning Kingman colt, the only yearling that they have at #TattsOctober Book 1, sells for 2,300,00gns. pic.twitter.com/eqgM8Vm7y0

“Our previous best came last year when we sold a Showcasing colt out of Grace And Glory for 600,000gns,” said Jones. “Lots of people told us he was a lovely horse, but you can’t really expect a sale like that! We have six Flat mares and one jumps mare – we are like to keep the numbers to this size and maintain the quality.

“All my thanks has to go to Ian Emes, he runs the farm – he does all the work, all the foalings; he has produced this horse beautifully.”

Westerberg began investing to a greater level last autumn, when its purchases included the BBAG Sale-topper Miss Yoda, now a highly promising two-time winner with John Gosden. And that ambition was further underlined at Goffs last week when von Opel walked away with two sale highlights in the €3 million Galileo sister to Forever Together, bought officially in partnership with Magnier, and the €2.2 million Galileo sister to Alice Springs.

Westerberg was similarly active at Tattersalls, notably when going to 2,100,000gns for the most expensive filly, a Galileo sister to recent Listed winner Lancaster House bred and sold by Barronstown Stud.

Through Jamie McCalmont, Westerberg also paid €850,000 for a Galileo half-sister to Ivawood, also from Barronstown.

As alluded to above, one remarkable feature of the sale was the hunger of American buyers for European stock.

Working with top trainer Chad Brown, agent Mike Ryan signed for 11 yearlings under his own name worth 2,420,000gns. Meanwhile, in conjunction with Seth Klarman’s Klaravich Stables, he came away with another 11 worth 2,410,000gns. Another three yearlings worth 1,375,000gns also headed Ryan’s way on behalf of Peter Brant’s White Birch Farm. White Birch itself were also the sole buyers of another six lots worth 1,100,000gns.

Ryan and his owners didn’t have it all their own way, however. No doubt attracted by their recent success on the track, Park Paddocks welcomed a flood of first-time yearlings buyers from America, among them BSW Bloodstock, Maverick Racing, Chad Schumer and Deuce Greathouse.

Indeed, it would seem that American buyers came away with approximately 50 horses overall worth 10,755,000gns. 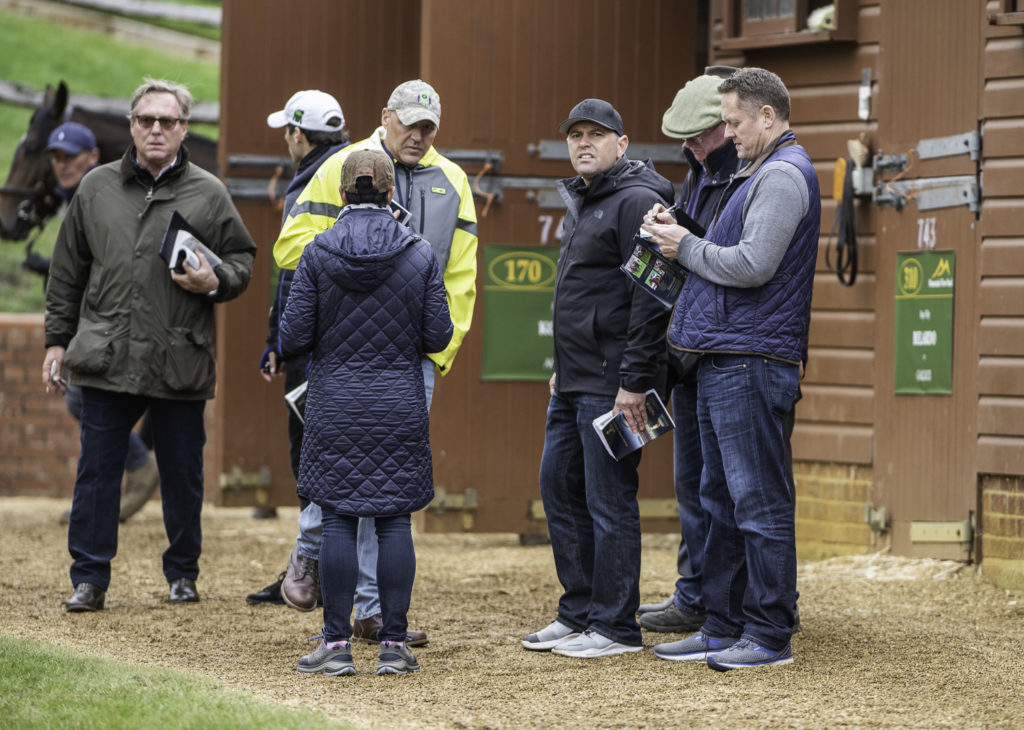 Chad Brown (black cap) was one of a number of American in town for Book 1 – Photo: Tattersalls/Laura Green

“The horses are tough, sound, well-raised and come from the best turf-producing area in the world.”

In his end of sale statement, Mahony paid tribute to the growing importance of American interest.

“A new dimension has been added by a particularly strong contingent of American buyers,” he said. “Their presence has been a growing feature in recent years, and we have worked consistently hard promoting the sale throughout America, so it has been genuinely rewarding to see so many new American buyers here this week. They have made a real impact and it looks as if around 50 yearlings will be heading across the Atlantic from this week’s sale.”

The Tattersalls October Sale continues on Monday with Book 2. 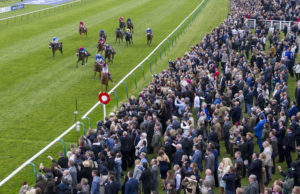