Former Nicky Henderson conditional jockey, Felix de Giles, relocated to France a little more than a year ago yet reminded those on these shores of his talent in the saddle on Festival Trials’ Day back in January.

He produced quite simply a masterclass on Urgent de Gregaine in the Glenfarclas Cross-Country Chase, only half-an-hour after Many Clouds sadly passed following his defeat of Thistlecrack in the Cotswold Chase.

His mount, a barely considered 50/1 shot, was 6lbs out of the handicap and carrying an additional 3lbs overweight. This is not to mention doubt regarding his resolution born out by his cheekpieces and noseband.

Nevertheless, de Giles picked off his rivals one by one and galloped past warm favourite Cantlow after they jumped the last of 32 obstacles.

“It was a bit of a surprise,” admits de Giles. “My boss [trainer Emmanuel Clayeux] has a few better cross-country horses at home that he might now decide to run at the Festival.

“He loves bringing horses over because of the great atmosphere that the British crowds create for the big races. It’s really something different for his owners to experience and he would do it more if only it was a bit more financially justifiable.”

The win was made even more remarkable considering de Giles had a crashing fall from Vezelay in the Cotswold Chase.

Three days later down in Pau, not far from the Franco-Spanish border, de Giles was winning another cross-country chase with five of his last six wins coming in that discipline.

The 27-year-old relocated to France little more than a year ago and finished in a creditable sixth behind fellow Brit James Reveley in the French jump jockeys’ championship.

Reveley became the first English jockey to take the title for more than a century.

With 42 winners on the board, de Giles admits great satisfaction at his progress across the Channel.

It brought four times as much prize-money

He added: “It probably exceeded my expectations, and though it wasn’t quite my best year purely in terms of number of winners, it brought four times as much prize-money as the same number of victories would have in Britain.

“I was really happy to see James win the title, he’s a really nice man and has become a good friend since I moved over here.”

de Giles was intended to renew his partnership with Urgent de Gregaine in the Cross-Country Chase at the Cheltenham Festival this week but the gelding has been ruled out. 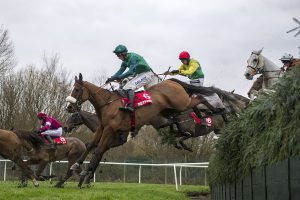 Up Next
Blackmore grabs Leinster National