Fry’s star back to the top

Yet another mouthwatering finish presented itself to the Punchestown crowd on day three, as Unowhatimeanharry got the better of the Cheltenham Stayers’ Hurdle winner Nichols Canyon by the closest of margins.

Harry Fry’s nine-year-old set out in fifth early on as fellow British challenger Lil Rockerfeller took the 12 runners along.

As the race heated up into the final mile Unowhatimeanharry began to make headway and almost joined the leader after the third last.

He was sent on by Noel Fehily on the turn for home but was tracked over a length behind by Ruby Walsh and favourite Nichols Canyon.

A good jump at the last saw him about a length clear and he found enough to hold off another surge from the Willie Mullins-charge by a head.

“I just thought we went very very slow,” reflected Fehily. “Plan a, plan b and plan c, everything went out the window because the last thing i wanted to be was in front two out.

“He’s such a tough little horse, he’s got the heart of a lion this fella he doesn’t give up on you.”

The son of Sir Harry Lewis last appeared in the Stayers’ Hurdle at the Cheltenham Festival where he finished third behind today’s favourite.

Now a three-time Grade 1 winner, he now makes it an astonishing nine wins from ten starts since he joined the Dorset-based handler.

Fry said: “What a fantastic race it was. Nichols Canyon pushed us all the way. Obviously Cheltenham wasn’t our day but its great to bounce back in a brilliant race like this.

He’s got the heart of a lion

“He travelled really well and Noel was brilliant on him and knew when to press the button. This is what it’s all about these big races.”

Later in the afternoon, the Mullins-trained Great Field made it a double on the day for owner JP McManus by taking the Grade 1 Ryanair Novice Chase.

A son of Great Pretender, the six-year-old made all the running in the hands of the young Jody McGarvey to win by an impressive 11-lengths. 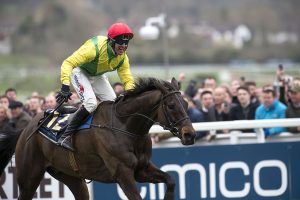