Richard Johnson announces his retirement from the saddle
News

Freewheelin Dylan led from pillar to post to spring an enormous 150-1 surprise in the Irish Grand National for trainer Dermot McLoughlin and jockey Ricky Doyle at Fairyhouse on Monday.

It was a remarkable performance from the nine-year-old given that he had been off the track for 173 days. His previous win had come back in July 2020 in a handicap chase at Kilbeggan.

The application of cheekpieces and the decision by Doyle to settle his mount at the head of affairs clearly helped Freewheelin Dylan return to his best as he settled into a lovely rhythm out in front.

Showing no signs of slowing down, Freewheelin Dylan still held an advantage as the field turned for home for the final time and while Run Wild Fred threw down a strong challenge at the last, he found plenty to win by one and a quarter lengths.

Back in third was Enjoy D’allen at 40-1 while favourite Latest Exhibition could only manage fourth. Freewheelin Dylan’s odds of 150-1 ensured that he became the longest-priced winner of the staying event, which was first run in 1870.

The success was even sweeter for McLoughlin whose father Liam was the first jockey to win on Arkle and rode Kerforo to victory in the 1962 Irish Grand National.

He said: “It’s great – it went to plan. I said to Ricky ‘he likes to bowl along in front and jumping is his forte, so use him up’. I was a bit concerned about not getting a run into him. I said turning into the straight that we’d better start shouting, because I knew he’d stay going.

“When he came in off grass last year, we said in September-time we’d aim for this. It was a race I always wanted to have runners in, let alone try to win it. My father rode the winner, so I was always trying to follow.

“I was fairly relaxed until they turned in. We’re based three miles down the road and we’ll keep progressing the best we can. I was 47 the other day. We have good help and good staff, and we have some nice horses. Coming here, I thought we had a good chance and thankfully it’s worked out.”

Doyle added: “I could not believe it – it was too good to be true. I could feel horses around me and picking up the home straight. I was in a dream the whole way – when I got to the last, I knew I had to jump [the fence] twice and I thought ‘Did I jump this the first time?’

“Winning the Irish National means everything to me. I love this sport, I love horses, and I’m over the moon.” 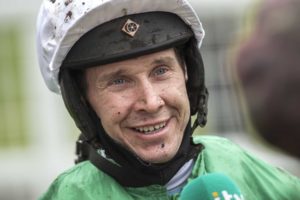 Up Next
Richard Johnson announces his retirement from the saddle