With poor prize-money a perennial problem in British racing, cross-Channel raids are ever more enticing and have proved fruitful for a number of English-based trainers over the last week.

Sunday’s Group 2 Prix Robert Papin fell to the Clive Cox-trained Reckless Abandon, who was chased home by Sir Prancealot, representing Richard Hannon’s stable. Both colts had run well at Royal Ascot with the unbeaten Reckless Abandon, a son of Three Chimneys stallion Exchange Rate, having won the Norfolk Stakes, while Sir Prancealot finished fourth in the Coventry Stakes after winning the Listed National Stakes at Sandown.

Cogito came home best of the two British-trained challengers in a five-runner line-up for the Prix Eugene Adam on the same card. Brian Meehan’s charge was beaten a length and a half by the Aga Khan’s Bayrir.

“It was very special,” said Palmer. “This filly is the reason I started training. I had a sudden rush of blood to the head and ten of us got together to buy her and that was it, I had to get on with it. The fact that she was my first horse and is now my first stakes winner makes it extra special.”

However, Palmer does not cite prize-money alone as a reason to target France.

He said: “The French press asked me about prize-money after the race and clearly wanted me to say that was the reason we were there but the truth is that there’s a lack of opportunities for fillies of this class in England and the bad weather this season hasn’t helped.

“I wanted to run her in a Listed race at Pontefract but that was called off without the race being rescheduled. You can run your 48-rated horses ten times a week but a horse of this grade has few chances. The Vichy race was the last Listed race in Europe for four-year-olds and upwards. If I’d run her at Ascot last weekend she would have had to give 8lbs to three-year-olds.”

Despite the best attempts of the French racing authorities to promote racing in France to overseas runners, Palmer’s experience was not altogether a happy one.

“The French could not have been more unwelcoming if they’d tried,” he said. “When we arrived at the racecourse we were told there were not stables for us and the fillies would have to stay on the lorry. As much fired by indignation as anything else I’ll definitely take horses back to France. There are seven stakes races during Vichy’s festival so that may well be a target next year.”

Making Eyes was one of two runners in France from Palmer’s Newmarket stable last week along with two-year-old Tipping Over, who finished fifth in another Listed contest, the Prix des Reves d’Or, on Tuesday and still came home with £2,291.67 in prize-money. 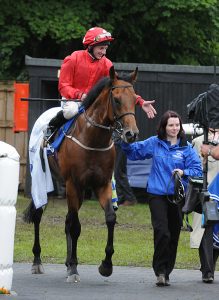 Up Next
Legendary stallions live on