There’s been superb racing all week in England but Frankel was the one horse everyone wanted to see and he didn’t disappoint, recording an easy five-length win over his old foe Excelebration in the Lockinge Stakes at Newbury. The Juddmonte-bred son of Galileo has now posted ten consecutive victories, six of which have come in Group 1 company.

Frankel the crowd-pleaser at Newbury

Led by his three-parts brother and pacemaker Bullet Train until quickening clear of his rivals with two furlongs left to run, Frankel could hardly have had a more straightforward seasonal resumption. With connections having indicated that he will step up to ten furlongs at some stage this season, he looks likely to remain racing at a mile for the immediate future with his likely next start being the Queen Anne Stakes on the opening day of Royal Ascot.

Trainer Sir Henry Cecil said: “His first race [of the season] is never his best but he had to have a run somewhere before Ascot. He´s had a good blow and looking back at his last two seasons I´m absolutely certain that he´ll come on quite a lot for the race. All being well, he´ll probably tackle a mile and a quarter as the season goes on but there´s no hurry.”

With Bullet Train also in the Lockinge line-up and Frankel’s full-brother Noble Mission in action at Newmarket, where he finished runner-up to Lucarno’s brother Thought Worthy in the Listed Fairway Stakes, the Juddmonte mare Kind had the rare distinction of having her first three foals – all of whom are black-type winners – in action on the same day. 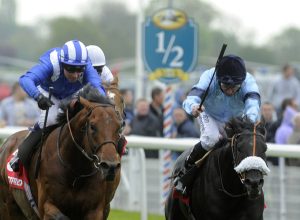 Up Next
Paddock-mates now top two in Derby