Consignor sold a Mehmas filly for £100,000 at Goffs UK on Tuesday

Applauding cost just 6,500gns at Tattersalls in December 2013 and seven years on, she remains the gift that keeps giving for Alice Fitzgerald.

The Royal Applause mare produced a really fast filly for Fitzgerald in the form of Ginger Nut, the 2018 Weatherbys Super Sprint winner who went on to win the Limeston Turf Sprint Stakes at Keeneland in US, and was again to the fore on Tuesday at the Goffs UK Premier Sale as the dam of a Mehmas filly who made £100,000 to Jake Warren.

“We’re in tough times but obviously her sire is flying, which helped,” said Fitzgerald of the filly, who is closely inbred to Royal Applause. “And she’s a half-sister to a fast filly in Ginger Nut. We knew she was popular but we didn’t expect her to make that much.”

Fitzgerald explained that she was drawn to Applauding back in 2013 due to ‘her good, fast family’ – she is a half-sister to Listed winner Metaxas from the family of French champion two-year-old Play It Safe. “She has a very nice Kessaar colt foal on the ground, he’s a belter,” she added.

Fitzgerald works by day in marketing but is a regular presence at the sales under her own banner with her partner Michael Doyle. “The horses are morning, evening and weekends!” she said. “We’ve had some good prices before though this would be right up there. We’ve also sold some good horses here. Ginger Nut was one of them and then we also sold Hey Jonesy, who won the Wokingham this year, and among the jumpers, My Tent Or Yours.” 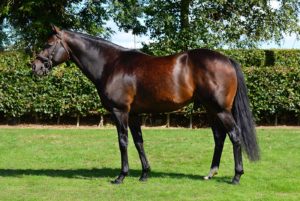 Up Next
Small investment reaps rewards for Lewinstown Farm