Smiles all round at Orby Sale
News

European imports excelling down under

It speaks volumes for the brilliance of Frankel’s triumphs that they still rank as the most impressive Group 1 victories recorded this year by a Warren Place protégé, his contemporary and former stablemate Glencadam Gold having, to use the local vernacular, “fair dinkum bolted in” in the Metropolitan in Sydney on Saturday.

Glencadam in the ring where he was bought for 135,000gns ©Tattersalls

In recent years, the staying ranks in Australia have come to be dominated by European horses. Sydney’s leading trainer Gai Waterhouse is one of many to have latched on to this trend. Her most recent purchase is this year’s St Leger third Michaelangelo (who is due to head south in the next few weeks to begin his preparation for the 2013 Melbourne Cup) but currently her best buy appears to be Glencadam Gold, whom she purchased (in conjunction with McKeever Bloodstock) out of Henry Cecil’s stable for 135,000gns at last year’s Tattersalls October Horses-in-Training Sale. The son of Refuse To Bend had shown smart form in Britain without posting any worthwhile stakes places, but now he is a triple stakes winner, having preceded his last-start Group 1 victory with wins in the Premier’s Cup at Rosehill and the Newcastle Gold Cup.

The ease of Glencadam Gold’s all-the-way three-and-three-quarter-length victory in the Metropolitan has seen him promoted to joint-favouritism (with Mount Athos) for the Melbourne Cup. He is likely to receive a hefty penalty for that race, but he is still at the right end of the handicap, having carried only 53kgs on Saturday. That light weight meant that Waterhouse’s principal jockey Nash Rawiller could not take the ride, leaving the mount to Tommy Berry, who rode three winners for Waterhouse on the card including another Group 1 race, the Epsom Handicap, on Fat Al, who was burdened with only 52kgs.

Other good runs by former Europeans in Sydney on Saturday included the former Amanda Perrett-trained Kelinni, who is now trained in Sydney by expatriate New Zealander Chris Waller and who completed a quinella for Refuse To Bend (who also had a winner in Eagle Farm in Brisbane on Saturday) by finishing second to Glencadam Gold; and the 2009 Irish Derby place-getter Mourayan, winner of the Group 3 Craven Plate on the same card.

In Melbourne, the Group 1 Turnbull Stakes (2000m) was dominated by imports. The winner was the former Harry Dunlop-trained Green Moon, who scored by a long neck under Craig Williams. Runner-up was Seville, who finished second for Aidan O’Brien last year in both the Irish Derby and the Grand Prix de Paris, while third place was taken by the former William Knight-trained December Draw, a Listed place-getter at Kempton in 2010.

Mourayan, Green Moon and Seville are all owned by successful Melbourne businessman Lloyd Williams, whose horses are trained by Robert Hickmott at his private stable north-east of the city. Williams has been a regular large-scale buyer of horses from Europe and his racing operations revolve around the Melbourne Cup, so it must be very pleasing for him to have so many of his imported stayers in such good form as the clock ticks down towards the Cup’s famous ‘first Tuesday in November’ date. 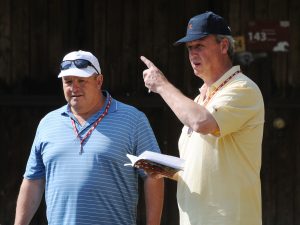 Up Next
Smiles all round at Orby Sale