Enable looks the best three-year-old in Europe and probably the world after pulverizing the opposition in the King George VI and Queen Elizabeth Stakes at Ascot on Saturday.

The daughter of Nathaniel, emphatic winner of the Epsom and Irish Oaks, was taking on older horses for the first time, yet started 5-4 favourite in the ten-runner field and the result never looked in doubt.

Frankie Dettori, back from injury and riding at 8st 7lb, tracked the pace before kicking for home with two furlongs to run on rain-softened ground. Enable ran on strongly and had four and a half lengths to spare over Coral-Eclipse victor Ulysses, conceding a stone to the winner.

Enable is the latest star for owner-breeder Khalid Abdullah and trainer John Gosden, who confirmed that she is the best 12-furlong filly he has trained, along with Taghrooda, who also claimed the King George during her three-year-old season.

Gosden said: “She’s a wonderful filly. The King George has always been a meeting of the generations and I’ve always been keen on it, as I was with Nathaniel and Taghrooda.

“Enable would have won on good ground. She can handle anything. She’s won on Tapeta, good to firm and now soft to loose.

“The style of her winning makes her great – it’s quite obvious she wants to race. She just wants things to go her way and takes the race by the horns.”

The trainer confirmed that the Yorkshire Oaks – in which Taghrooda was beaten at 1-5 – and then the Prix de l’Arc de Triomphe were next on Enable’s agenda for this year. 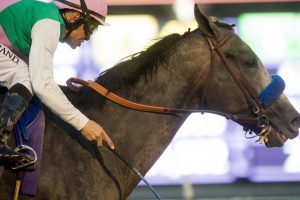 Up Next
Lacklustre Arrogate beaten at Del Mar