The sight of the Trevor Hemmings silks being carried to victory in the Grade 3 Ladbrokes Trophy at Newbury brought cheer to the assembled crowd and those watching on TV on Saturday afternoon, as the eight-year-old triumphed on his comeback in one of the most competitive handicaps of the season.

Hemmings, a passionate National Hunt supporter, passed away in October yet his familiar colours are still gracing racecourses up and down the country. This latest high-profile winner was also bred by the late owner at his Gleadhill House Stud.

It was the other Hemmings runner, 2020 victor Cloth Cap, that took the field along in the 3m2f contest under Tom Scudamore, tracked by Copperhead and Remastered, with favourite Eklat De Rire settled towards the rear of the 21-runner field by Rachael Blackmore.

Cloudy Glen and Charlie Deutsch made headway around the field to lead four fences from home and as the field thinned out – Eklat De Rire was pulled up before the 17th – the well-fancied Fiddlerontheroof and Brendan Powell emerged as the only threat in the home straight.

The Venetia Williams-trained runner jumped the last in front and though Fiddlerontheroof finished strongly, Cloudy Glen held on to score by half a length, with Brahma Bull 28 lengths away in third.

Earlier on the card, a fine front-running ride from Jack Quinlan saw the Neil King-trained Onemorefortheroad come home in front in the Listed intermediate hurdle (2m½f) while Ahoy Senor galloped his rivals into submission under Derek Fox in the Grade 2 John Francome Novices’ Chase (2m7½f).

A superb finish to the Fighting Fifth Hurdle at Newcastle saw 2020 heroine Epatante and Not So Sleepy share the spoils in the Grade 1 two-mile contest.

Epatanate looked to have been delivered with a perfectly timed challenge by Aidan Coleman, but Jonathan Burke roused a terrific late effort from Not So sleepy to force a dead heat on the line. 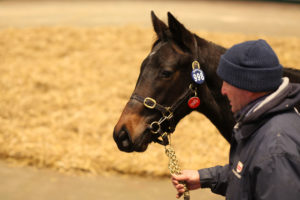 Up Next
Market buoyancy continues with strong Tatts Foal Sale