It was billed as a clash between Europe, North America and Japan but in a result that took the roof off the King Abdulaziz Racetrack in Riyadh, it was local interests who came out on top for the third renewal of the Saudi Cup with the Mitab Almulawah-trained Emblem Road scoring at 80/1 to spring one of the biggest shocks in recent racing history.

The American-bred came into the race having won each of his past three starts including the King Faisal Cup, a local Group 1. However, in a race that featured last year’s winner Mishriff, bidding to become the highest-earning racehorse in history, top American colts Mandaloun and Midnight Bourbon and Japanese Group 1 winners Marche Lorraine and T O Keynes, Emblem Road was understandably largely overlooked in the 14-runner field.

Yet in the end, it was an authoritative victory. Jockey Wigberto Ramos was content to bide his time near the back of the field as Secret Ambition, Art Collector and Mandaloun helped force a brisk set of early exchanges. T O Keynes back-pedalled early on while Mishriff, caught out wide and to the fore under David Egan, faded tamely under pressure; in a rare underwhelming show, he went on to finish a distant last.

Meanwhile, the American colt County Grammar, representing Zedan Stables and the beleaguered Bob Baffert, had overcome the long-time leader Secret Ambition and after having fought off Midnight Bourbon, appeared to have the race in safekeeping, only to succumb to Emblem Road’s late charge on the outside. At the line, the winner had half-a-length to spare over Country Grammar, who was in turn another length-and-a-half in front of fellow American raider Midnight Bourbon.

In what was a remarkable result for trainer Mitab Almulawah, his other runner, the former Mark Johnston-trained Making Miracles, ran fourth.

With Emblem Road carrying the colours of Prince Saud bin Salman Abdulaziz, it was an outcome that was understandably warmly received by Prince Bandar bin Khaled Alfaisal, the brainchild behind the Saudi Cup meeting.

“Wow – to have a locally-trained horse perform that way is very emotional,” he told Racing TV. “I’m very happy for the connections and I’m happy for Saudi Arabia. It’s extremely special and I’m excited to think about what this could mean for the future of horse racing in Saudi Arabia.”

Now a seven-time winner, four-year-old Emblem Road was bred in Kentucky by Brushy Hill LLC and purchased by Bruno DeBerdt for $80,000 at the OBS June Two-year-olds in Training Sale in Florida. He becomes the highest earner for Lane’s End Farm’s Quality Road, the sire of 13 Grade 1 winners overall, and is out of the Bernardini mare Venturini, a daughter of the Juddmonte-bred Grade 1 winner Ventura.

The local success capped an evening that up until then had showcased the power of the Japanese Thoroughbred to an exceptional degree.

Each of the first three races on the card, the Group 3 Neom Turf Cup, Group 3 1351 Turf Sprint and Group 3 Red Sea Turf Handicap, fell to Japanese-trained horses, namely Authority, Songline and Stay Foolish, as did the Group 3 Riyadh Dirt Sprint, which was won by Dancing Prince.

Remarkably, all were ridden by Christophe Lemaire.

Under an excellent front-running ride, Authority dictated matters throughout in the Neom Turf Cup and kicked clear at the top of the stretch to win by just over a length. Kaspar, a 50/1 short for Mohammed Alhirabi, defied his odds to stay on into second, half-a-length ahead of the Aga Khan’s Ebaiyra in third. British raider Pyledriver was trapped wide under Martin Dwyer and was in the process of weakening when caught up in an incident in which Channel Cat came down under Joel Rosario.

A multiple Group 2 winner in Japan, five-year-old Authority had found only Contrail too good when second in the Japan Cup on his previous start.

“He was definitely the best horse in the race,” said Lemaire of the Tetsuya Kimura-trained winner. “He was very comfortable in front, he was looking around and his breathing was good. I knew he would stay the trip so I used his acceleration and there was no contest.”

Authorite is one of 17 stakes winners by Japanese champion Orfevre, who stands at the Shadai Stallion Station in Japan, and was bred by Northern Farm out of Rosalind, a placed Symboli Kris S daughter of Grade 1 winner and blue hen Cesario.

Northern Farm were also on the mark as the breeder of Songline, who charged home in the 1351 Turf Sprint to narrowly deny a fast-finishing Casa Creed, trained in the US by Bill Mott. Happy Romance, partnered by Tom Marquand, ran a brave race for Richard Hannon to finish only half-a-length adrift of the winner.

“Once again it shows that Japanese horses are very strong,” Lemaire said. “I’m very glad she found her form again. She had a good trip, I used her turn of foot and she held on at the finish.”

As with Authority, Songline struck a winning note for the Yoshida’s Shadai Stallion Station as a daughter of a resident stallion, in her case Japanese Derby winner Kizuna. Authority and Songline also share the same damsire in Japanese Horse of the Year Symboli Kris S.

A momentous afternoon for Japan and Christophe Lemaire continued just one later race with the success of the Yoshito Yahagi-trained Stay Foolish in the Red Sea Turf Handicap. Lemaire made all aboard the seven-year-old to land the 1m7f event unchallenged by an extended four lengths and secure a glorious three-race sweep for Japan.

“It’s unbelievable,” said Lemaire. “I was confident as he looked beautiful, he felt good and I was confident he would stay the trip. He was so comfortable in front, I was able to use his stamina and he didn’t stop.”

The Japanese sweep of the action came to a halt in the Group 3 Saudi Derby, but only by the narrow victory of the American colt Pinehurst. The Bob Baffert-trained son of Twirling Candy, who was a Grade 1-winning two-year-old in California last season, was always to the fore under Flavien Prat and clung on to deny the late thrust of the Japanese colt Sekifu by a half-a-length. Fellow Japanese raider Consigliere wasn’t far away in third.

However, it didn’t take long for Japanese interests and Lemaire to get back on the winning beat, with the jockey teaming up with trainer Keisuke Miyata to land the Riyadh Dirt Sprint on Dancing Prince.

In what was another front-running Lemaire masterpiece, Dancing Prince never saw another horse to cross the line nearly six lengths to the good of Good Effort. Another Japanese performer, Chain Of Love, ran well in third.

While the day’s events left Japanese spectators celebrating, the results further underlined the power of the Yoshida family, with brothers Katsumi and Teruya having bred each of the four winners. Authority and Songline are both products of Katsumi Yoshida’s Northern Farm while Stay Foolish and Dancing Prince were bred by Teruya Yoshida’s Shadai Farm.

Stay Foolish shares his sire, the Sunday Silence stallion Stay Gold, with Orfevre, the sire of Authority. Stay Gold was an accomplished globe-trotter in his pomp who struck an international note for Japan when successful in the 2001 Dubai Sheema Classic at Nad Al Sheba.

However, Dancing Prince is a son of the lesser-known Pas De Trois, a Group 3-winning sprinter who stands for just 300,000yen (approximately £2,000) at Lex Stud in Japan. A nine-time winner overall, he is one of ten stakes winners sired by the American Grade 1 winner Swept Overboard, a son of End Sweep. Dancing Prince is the sole stakes winner in four small crops for his sire to date. 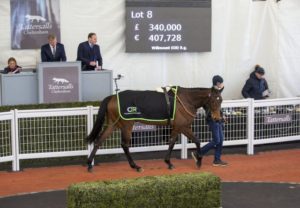