Son of Galileo Gold takes Group 1 at the Curragh

A dogged performance saw the Hugo Palmer-trained Ebro River hold on to claim the Group 1 Keeneland Phoenix Sakes in a thrilling four-way finish at the Curragh on Sunday.

Having been prominent in the early stages under jockey Shane Foley, Ebro River had a host of challengers in behind including Castle Star, Go Bears Go and Dr Zempf as they approached the final six furlongs.

It was Peter Brant’s Dr Zempf who laid down the strongest marker, but it was Ebro River who found plenty under pressure to win by three-quarters of a length with a head back to Go Bears Go in third.

The result was even sweeter for owners Al Shaqab Racing as Ebro River is a two-year-old son of the operation’s Galileo Gold, who provided them and Palmer a breakout success in 2016 when landing the QIPCO 2,000 Guineas.

We present the first 2 year old Group 1 winner in Europe of 2021, Ebro River the winner of our feature the Keeneland Phoenix Stakes🥇 @keenelandsales #AugustFestivalofRacing pic.twitter.com/5zF3ozkDMO

Ebro River hails from Galileo Gold’s first crop and was bred by Tally-Ho Stud, who stand the son of Paco Boy at their operation in Ireland, out of the winning Balmont mare Soft Power.

Offered at Book 2 of the Tattersalls October Yearling Sale last year, Charlie Gordon-Watson went to 75,000gns on behalf of Al Shaqab to secure the colt.

Foley said: “Hugo fancied the horse. He had a good run in the Coventry. He’s tough and he’s genuine. We just said beforehand that we wouldn’t mind changing the tactics a bit.

“We’d been dropping him in but there didn’t look to be much pace today and with that tailwind it can be hard to get them back up front.”

Also at the Curragh on Sunday, the Joseph Murphy-trained Gustavus Weston came out on top in the Group 3 Rathasker Stud Phoenix Sprint Stakes.

July Cup hero Starman could only finish third as the Jerome Reynier-trained Marianafoot extended his winning run to seven races as he was an impressive winner of the Group 1 Prix Maurice de Gheest at Deauville.

The sprint had drama from the start as favourite Campanelle nearly unshipped jockey Frankie Dettori as the stalls opened and, in the process, saw Dettori bang his head on the three-year-old. The pair ultimately went on to finish last of the 12 runners.

As the race unfolded upfront, Marianafoot powered clear once hitting the front as Lady Bamford’s Tropbeau snatched second from Starman as they crossed the line.

Reynier said: “The plan really worked beautifully. Over this distance we wanted to attack in the final 100 metres because we know he stays further and some of the others are pure sprinters.

“We won’t rush to decide, but he’ll stay up here and he could run in the Jacques le Marois, depending on how he comes out of this and how the race shapes up.” 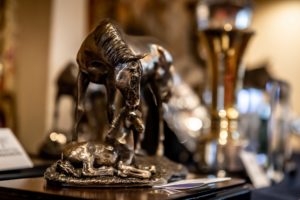