The European Breeders’ Fund (EBF) has passed a significant milestone in its contribution of more than €100 million in sponsorship to European racing since its creation in 1983 and the first donations made in 1984.

Now in its 29th year of sponsorship, the EBF provides a service which is essentially a ‘self-help’ scheme, with funds contributed by European stallion owners. Additional payments are made by breeders and owners of horses bred outside Europe who make payments to ensure their horses become EBF eligible.

EBF Chief Executive Sam Sheppard said: “The support we have had over many years has been superb.

“I think the EBF model has proved to be effective as well as standing the test of time, while some other schemes have been put under considerable pressure, or have foundered.

“The EBF could not have taken off in the way it did without the stallion owners and their input is immensely appreciated.

“In addition, our involvement with Breeders’ Cup and the owner/breeders of US-sired stock has reaped dividends. Altogether, this has allowed the EBF to provide European racing with over €100,000,000 – an extraordinary figure.”

Sheppard, who retires at the end of 2012 after joining the EBF at its start, added: “I have come across many wonderful people in my EBF role, most of whom dedicate a good part of their lives to the thoroughbred.

“Inevitably, during that time the EBF and I have been through some choppy waters but we remain strong, sustainable and looking forward to the future.”

Sheppard was quick to praise his small team of staff in the EBF’s Newmarket office, saying: “They exhibit great tenacity in achieving results for the EBF. It is and has been a privilege to work with them.”

EBF co-ordinating committee member Philip Freedman paid tribute to Sheppard’s commitment to the project since its inception. He said: “Sam represents all that the EBF stands for – integrity, internationalism and a healthy bloodstock industry.

“Not only does the EBF owe him a huge debt of gratitude, but so do all those who have been beneficiaries over the last 30 years – owners, trainers, jockeys, racecourses and breeders.”

Sheppard has also established a healthy relationship between the EBF and the Breeders’ Cup.

“It has been nearly three decades since I discussed with Sam and Peter Willett the emergence of the EBF concept and how it would relate to the equally new Breeders’ Cup,” said former Breeders’ Cup President D G Van Clief.

“Due in great part to Sam’s perseverance and diplomacy, that evening would prove to be the beginning of a longstanding relationship between the two organisations.

“I have enjoyed working with Sam and have watched the application of his tireless work ethic, passion for the thoroughbred and leadership qualities that take the EBF from a mere concept to an everyday reality.” 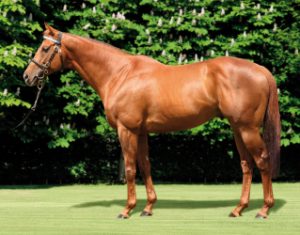 Up Next
Group winner is first for Tamayuz