Windsor House Stables handler, Harry Dunlop, was left very proud of his stable star Robin Of Navan after he put up a creditable display in the Group 1 Prix d’Ispahan at Chantilly on Sunday.

Known for racing mainly in France, the son of American Post was the outsider of the five-strong field which was headed by the son of the great Zarkava, Zarak.

Partnered by this year’s French 2,000 Guineas-winning jockey Cristian Demuro, in line with his usual running style he bounced out to the front.

After setting nothing more than an even pace, Demuro began to quicken things over two furlongs out with Al Shaqab’s Mekhtaal a few lengths trailing in second.

Still in front inside the final half-furlong, Mekhtaal loomed alongside with the leader battling on well on his inner.

Jean Claude-Rouget’s four-year-old got up to lead in the final two strides, denying a ninth British-trained winner of the one mile and one furlong contest by a neck.

“We thought for a moment we had won, but he ran a great race and we’re delighted with him,” said Dunlop.

“He hurt himself quite badly in the French Derby last year and it’s taken him a while, but he’s back to the sort of form he showed in his two-year-old days and he’s proved he is a genuine European Group One performer.

We thought for a moment we had won

“I’m not quite sure where we will go now. He’s not in at Royal Ascot but we will be looking at all the top mile-and-a-quarter races in Europe and see where we go. The Prix Daniel Wildenstein could be one to think about later in the year.”

Eleven of his 14 starts have taken place across the Channel, and the four-year-old has amassed nearly €600,000 in prize money.

His finest victory to date came back in the autumn of 2015 when he beat the Andre Fabre-trained Cloth Of Stars in the Group 1 Criterium de Saint-Cloud. 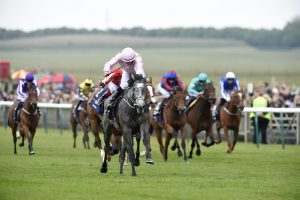 Up Next
Guineas double double for Ballydoyle