Dettori to lose out on big-race rides

Frankie Dettori will miss Saturday’s King George VI and Queen Elizabeth Stakes at Ascot and the first two days of the Qatar Goodwood Festival despite being partially successful in an appeal against a ten-day riding ban.

Dettori was handed his punishment for causing interference on runner-up Angel’s Hideaway in the Group 2 Duchess of Cambridge Stakes at Newmarket’s July Meeting.

Though his ban was reduced to six days by an independent disciplinary panel, it still rules him out of a string of big-race rides, including Gold Cup hero Stradivarius in the Goodwood Cup and unbeaten colt Without Parole in the Sussex Stakes.

“Appeals are intended to be re-hearings – panels can hear evidence not available to the stewards on the day, rather than simply a review of the original decision taken at the time.

“It is encouraging to see the panel reached the same conclusion as the stewards on the day, in that Mr Dettori was found guilty of careless riding and that the interference was noted as considerable.

“The decision to reduce the penalty from ten days to six is entirely a matter for the independent disciplinary panel. Given the extent of the interference, the BHA look forward to assessing the full written reasons to understand why such a reduction in penalty was applicable under the circumstances.

“Interference rules are designed to protect the safety and welfare of horses and jockeys who take part in a race.

“Penalties applied by stewards are crafted to ensure that an appropriate level of specific and general deterrence exists in order to ensure a fair, safe and level playing field for all participants in our sport, including the owners of horses that suffer interference, and those who bet on it.”

After the verdict, Dettori made a swift exit from the BHA’s High Holborn headquarters after thanking his QC Graeme McPherson, who explained that his client was late for a lunch date with his wife. 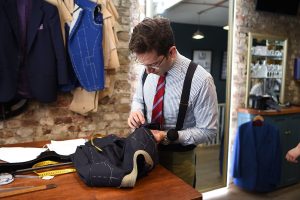