Cheltenham Festival and Group 1-winning jockey, Dougie Costello, has lost the ride on Quiet Reflection and will instead be replaced by Martin Harley.

Costello partnered the four-year-old throughout 2016 beginning with success across the Channel in the Group 3 Prix Sigy.

The filly sparked into the summer proper with her breakthrough success at the highest level coming in the Commonwealth Cup at the Royal meeting, also giving her trainer Karl Burke, who part owns her, a moment to savour.

This wasn’t the end of it. The daughter of Showcasing notched her second Group 1 in the Haydock Sprint Cup in September, displaying her trademark turn of foot to fend off subsequent Champions Sprint victor The Tin Man.

Speaking to Racing UK, Burke said: “Martin Harley will ride her this year. We’ve had a chat with the owners and decided to have a change of jockey.”

The Spigot Lodge handler has her targeted at either the Group 2 Duke Of York Stakes next week or the Group 2 Greenlands Stakes at the Curragh, as a prep for her engagement at Royal Ascot.

Burke added: “She looks fantastic, she’s put a bit of condition on. She worked at Newcastle today [Monday], I’ve seen her work better and her work has been a little workmanlike this winter.

“Whether she’s just a year older and knows the gallops so well. I expected her to work a little bit better at Newcastle than she did.”

I want to be as positive as possible

Having made the switch to the Flat only a few years ago, Costello has not ruled out a return to that sphere should the opportunity arise, yet remains disappointed by the news.

“There’s been no falling out. I want to be as positive as possible. This is racing and you get jocked off horses left, right and centre,” said Costello.

“I’m very grateful to Karl. My first year as a full-time Flat jockey, he gave me a great leg-up and I ended with four Group wins.” 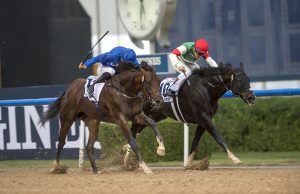 Up Next
Thunder Snow's antics bizarre