Harry Beeby, the former chairman of Doncaster Bloodstock Sales (DBS)/Goffs UK and father to Goffs CEO Henry, has died at the age of 83.

Beeby’s tenure at DBS naturally coincided with many landmark moments for the company, ranging from the sale of triple Grand National hero Red Rum, knocked down by Beeby for 6,000gns to Ginger McCain in 1972, to the first European breeze-up sale in 1977.

Goffs Chairman Eimear Mulhern led the tributes to Beeby on Thursday. She said: “Harry was a stalwart of the bloodstock industry for over 50 years. Greatly respected, a mentor to many, a true friend and loyal colleague, he was first and foremost a family man.

“To his beloved wife Elizabeth, his son Goffs Group CEO Henry Beeby, daughters Caroline and Belinda and to his extended family and wide circle of friends, we offer our deepest condolences.

“Harry had a true zest for life. He was one of life’s gentlemen and one of the great characters of the bloodstock and racing industries. He will be greatly missed and fondly remembered wherever horsemen gather.“

Goffs UK Managing Director Tim Kent added: “The term ‘legend’ is often overused but I don’t think there is a better way of describing Harry Beeby. He was a great mentor to us all and he lived life to the full. He was also passionate about the sales in Doncaster and it is this passion that he has instilled in the current team.  He will be sadly missed by us all.”

Harry’s funeral will be held at St Cuthbert’s Church in Hawick, arrangements later, with a Celebration of His Life planned to take place in Doncaster in association with a sale at a later date. 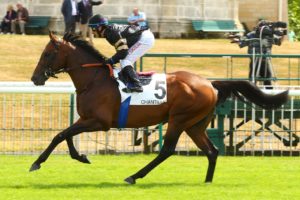 Up Next
Walzertakt joins Chapel Stud