Sonnyboyliston comes out on top in Ebor thriller
News

The British yearling sales season began in earnest at Doncaster with the Goffs UK Premier Sale, and it was John and Jess Dance’s Manor House Stud who walked away with Tuesday’s session topper, a £120,000 son of Dark Angel.

Just last year, Dance Thoroughbreds announced a temporary step back from owning horses, one that allowed them to fully evaluate how they would continue their operation going forward.

In April, they revealed the purchase of Manor House Stud and that James Horton, previously assistant trainer to Sir Michael Stoute, would be installed as their private trainer at the Middleham yard.

Having been active during this year’s round of breeze-up sales, it was no surprise to see the Dance’s continue their investment in young stock, particularly at the Premier Yearling Sale which in 2016 they had sourced Laurens from for £220,000.

The daughter of Siyouni went on to perform with distinction, landing the Fillies’ Mile as a two-year-old before adding five other top-level contests to her record – the Prix Saint-Alary, Prix de Diane, Matron Stakes, Sun Chariot Stakes and Prix Rothschild. 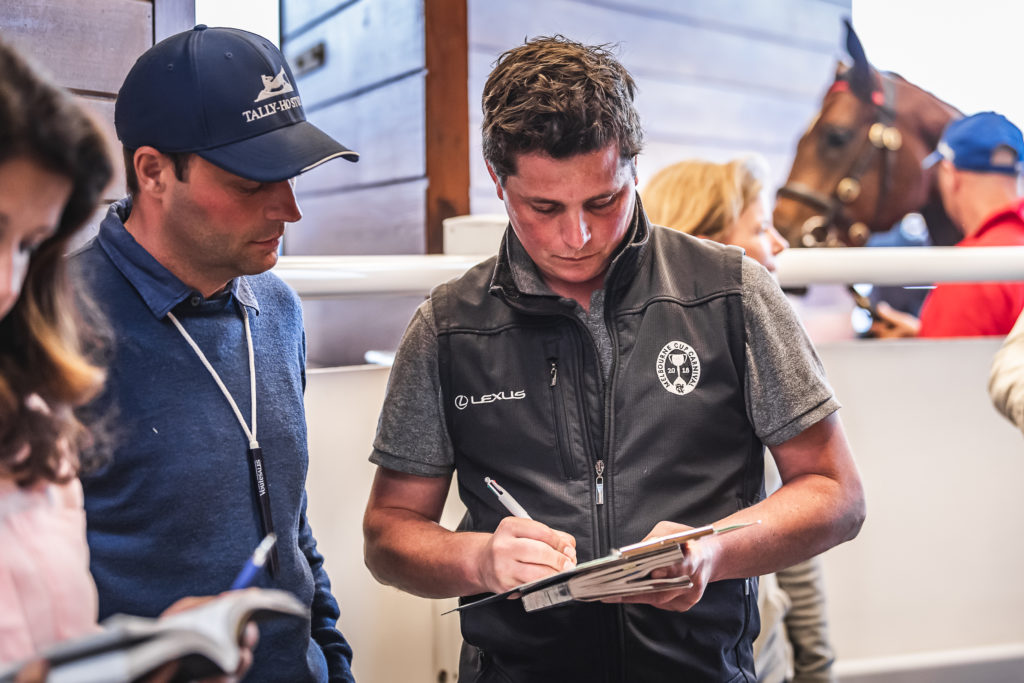 Offered by Yeomanstown Stud, the colt is the second foal out of the Listed-winning Elusive Pimpernel mare Elusive Beauty.

Horton, who stood alongside agent Ed Sackville as he signed the docket, said: “That’s the first one that we’ve bought as a team really. We all loved the horse and it’s an exciting horse to go to war with for next year.

“He [John] came down on Sunday and looked at a whole load of horses. We’ve been talking on the phone plenty. It was a horse he liked, Ed liked, and I liked so everyone was very happy with him.

“He’s going to Alan Creighton to be broken in and then he’ll come up to Middleham.”

Manor House Stud also signed at £95,000 for a filly by Showcasing, out of the winning Shamardal mare Girls Talk, offered by Lynn Lodge Stud, and secured a colt by Havana Gold from the same vendor at £40,000 in a private sale outside the ring.

Billy Jackson-Stops secured a Mehmas colt from the draft of Shinglis Stud for £115,000 on behalf of Sheikh Abdullah Almalek Alsabah, whose colours were carried to victory by Alotaibi in a 7f Newbury maiden earlier this month.

Jackson-Stops said: “They want to start a relationship with Andrew Balding and I’ve helped Andrew at the sales for a couple of years and this is one of a very small number of horses we had on the list for these guys. This was the one they liked the most and they were particularly keen to get him.

“We looked for some of the better horses and while this horse doesn’t have the deepest pedigree, he’s an absolutely cracking physical and is by the right sire who is upgrading mares and it made sense for them.”

Lot 175 of the Doncaster Premier Sale from Shinglis Stud, a colt by Mehmas from the family of Soar, sells for £115,000. pic.twitter.com/wa9NYWnqed

Teme Valley have added Clive Cox to its ranks of trainers after Richard Ryan was pushed all the way to secure Grangemore Stud’s Havana Grey colt out of the unraced Exceed And Excel mare Exrating at £110,000.

Ryan said: “It’s our first horse with Clive Cox and I thought it was the perfect fit. Clive loved him and he is a perfect example of what a sharp, strong, mature horse should be at two as a yearling.

“Clive is very good with that type of horse, and I hope he has the necessary speed. He should make a nice two-year-old. The brother is pretty good [Ehraz], and Mr Hannon trains the two-year-old and he was a formidable underbidder to the last moment. It was a bit more than we expected but for the good horses you have to push hard. 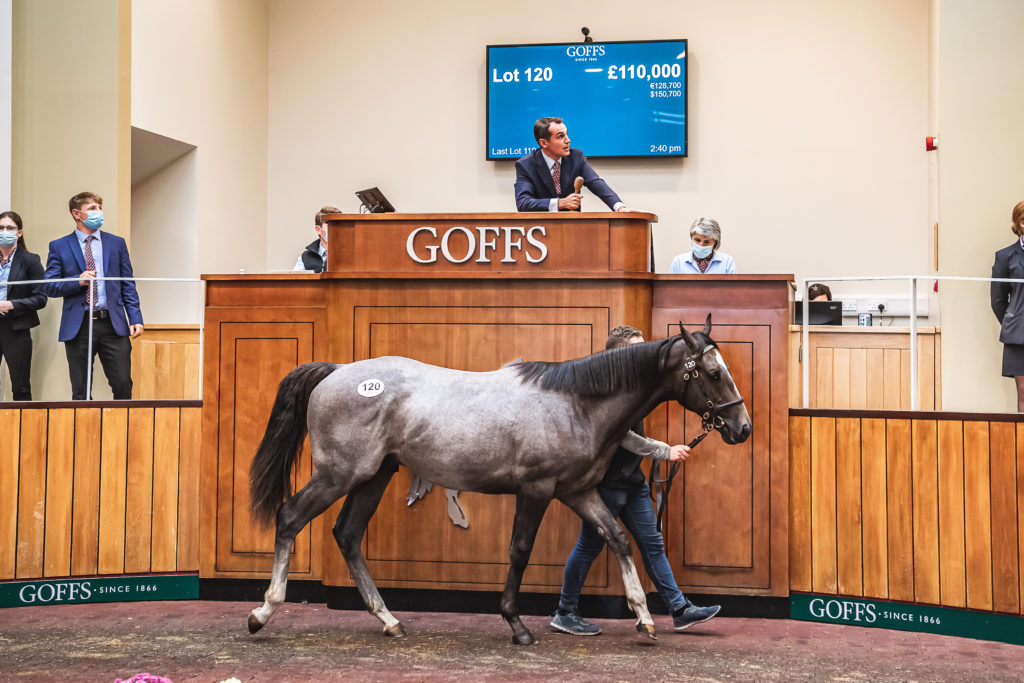 “When people are specialists in a certain genre, it’s foolish not to use that to our advantage as owners. Clive has been a great exponent with a mature, speedy horse and that’s exactly what this horse should be.”

Havana Grey is of course by Havana Gold and the latter had a fine result during Tuesday’s session when a colt by the Group 1 winner, offered by Baroda Stud out of the Listed-placed Al Kazeem mare Golden Spell, was bought by Oliver St Lawrence for £105,000.

Boasting the distinction of being the only filly on offer by Juddmonte’s young sire Kingman, Whatton Manor Stud’s youngster out of Nell Gwyn Stakes winner Daban was snapped up by Mick Murphy’s Longway Stables for £100,000.

Plans call for the yearling to enter Longway Stables’ breeze-up programme and as Murphy noted after his purchase of the youngster, the operation will be hoping to repeat the success they had with another Kingman filly.

That was Queen Of Love, who was sourced at the Goffs Orby Sale in 2018 before being sold for €650,000 at the 2019 Arqana Breeze-Up Sale. She has since gone on to win the Listed Prix Coronation for owner Lady Bamford.

The Kingman filly, who is a half-sister to the unraced Nigwa, will also follow the route that her dam Daban took to the racetrack having been sourced for 260,000gns by Blandford Bloodstock at the Tattersalls Guineas Breeze-Up Sale in 2016.

Lot 74, the @whattonmanor consigned KINGMAN (@JuddmonteFarms) filly out of the Nell Gwyn winner DABAN is purchased by @longwaystables for £100,000. pic.twitter.com/wguCubBlZU

Murphy said: “We’ve had great success with Kingman before – Queen Of Love that we sold for €650,000 at Arqana a couple of years ago. She’s a little bit handy; a bit on the small side but she looks like she’ll be quick. I remember her dam breezing – with her pedigree there could be a good upside.”

Also to hit the £100,000 mark were Lynn Lodge Stud’s Acclamation colt who was bought by Johnny McKeever and Tally-Ho Stud’s daughter of Mehmas, out of the winning Rock Of Gibraltar mare Fainleog, who was snapped up by Alex Elliot.

Of the purchase, Elliot added: “She was the one horse I wanted to buy today – I didn’t have a long list today but have a very long list for tomorrow. We all know about Mehmas.

“She looks like an Ascot type of filly; vetted very good and she’s going to go to Archie Watson; he’s a very good operator. Even if she just misses, she’s going to have good re-sale [value] to the States because of Going Global in California and they’re all going mad for Mehmas.

“Even if she’s placed in a maiden, she’s probably worth double what we paid here today.” 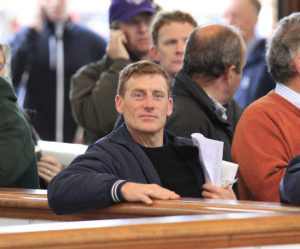 Up Next
Sonnyboyliston comes out on top in Ebor thriller