Son of Frankel is introduced to breeders at a fee of £25,000

The four-time Group 1 winner, whose other top-level successes included the Prix Ganay and the Coronation Stakes, has been introduced to breeders at a fee of £25,000.

A homebred for Anthony Oppenheimer’s Hascombe and Valiant Studs, Cracksman is by Juddmonte’s exciting youngster Frankel and out of the Listed-winning Pivotal mare Rhadegunda.

Cracksman is one of five top-level winners for Frankel alongside Soul Stirring, Mozu Ascot, Without Parole and Call The Wind. His further family on his dam’s side includes the Derby and Prix de l’Arc de Triomphe hero Golden Horn, who also stands at Dalham Hall and will command a fee of £50,000 in 2019 – down from £60,000 this year.

Joining Cracksman at Dalham Hall Stud to begin their stud carries are top-class sprinter Harry Angel, who will command a fee of £20,000, and the Eclipse-winning Hawkbill, to be offered at £7,500.

Darley’s Irish base of Kildangan Stud will welcome Jungle Cat, the Group 1 Al Quoz Sprint and Group 1 Rupert Clarke Stakes-winning son of Iffraaj, to their roster next year at a fee of €8,000.

Completing the new recruits for 2019 is Sea The Star’s Group 1-winning son Cloth Of Stars, who heads to Haras du Logis in Normandy to stand at €7,500.

Have you see our 2019 European fees yet? 👇 pic.twitter.com/98uoQeQxQj

Darley’s flagship sire Dubawi, whose youngsters Too Darn Hot and Quorto have struck in Group 1s this season, remains unchanged at £250,000 for the third consecutive year in a row.

Sam Bullard, Darley’s Director of Stallions, said: “We are delighted to announce the fees for the Darley roster in Europe. Never before have we been able to offer breeders such great value across every sector of the market.

“To be entrusted with the future careers of two great speedsters in Harry Angel and Jungle Cat, Eclipse winner Hawkbill, by one of America’s best, as well as the highest rated horse in the world in Cracksman is a huge privilege.

“We will continue our policy of selling a limited number of breeding rights, and to that end we look forward to working closely with breeders as we strive to uncover the next Dubawi.” 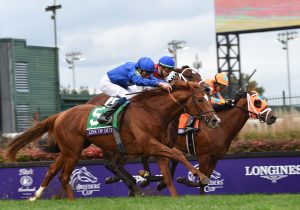