Colreevy stars on opening day of the Punchestown Festival

The opening day of the 2021 Punchestown Festival belonged to Willie Mullins as the County Carlow handler bagged five winners including the three Grade 1 contests on the card, though there were still a few surprises in store.

The betting suggested the Grade 1 Dooley Insurance Group Champion Novice Chase was a match between Monkfish, unbeaten during the current campaign, and Envoi Allen, who relinquished his perfect race record when falling in the Marsh Novices’ Chase at the Cheltenham Festival.

With just four runners going to post for the extended three-mile contest, the pattern of the race was established early as Danny Mullins set the pace on mare Colreevy, tracked by stable companion Monkfish and Envoi Allen, with Franco De Port, the third Mullins runner, settled in rear.

Jumping nimbly and accurately out in front, apart from a mistake at the fifth fence, Colreevy was still travelling comfortably with half a mile to run. The race changed at the third last as Monkfish made a bad mistake and Franco De Port hit the deck, while Envoi Allen looked to be struggling under Rachael Blackmore.

Colreevy was still galloping on strongly turning for home as Paul Townend asked Monkfish for more while Envoi Allen, clearly out of sorts on his first run over three miles, was pulled up before two out.

Despite a messy jump at the last fence, Colreevy held too many guns for Monkfish and crossed the line eight lengths clear of her stablemate, with Townend accepting defeat on the run-in.

Colreevy, in foal to Walk In The Park, had previously captured the Grade 2 mares’ chase over two and a half miles at the Cheltenham Festival and was finishing her racing career in the best possible fashion.

There was another one-two for the Mullins stable in the Grade 1 William Hill Champion Chase as Rich Ricci’s Chacun Pour Soi saw off Cheveley Park’s Allaho with a comfortable five and a half length success in the two-mile feature under Paul Townend.

The first Grade 1 for the Mullins stable came earlier on the card when Echoes In Rain claimed the eCOMM Merchant Solutions Champion Novice Hurdle (2m½f) under Patrick Mullins, defeating Colonel Mustard by three and a half lengths.

Trainer Emmet Mullins, nephew of Willie, was also on the mark courtesy of first-time starter Crowns Major in the closing bumper while County Wicklow handler Philip Rothwell enjoyed a double, taking the opening handicap hurdle with Cousin Harry and the hunters’ chase with Singing Banjo. 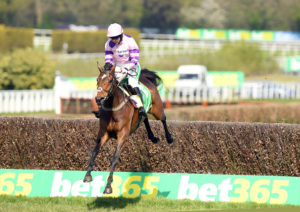