Poule d’Essai des Poulains scorer Brametot added a second Classic success to his resume when getting up in the nick of time to win the Prix du Jockey Club.

Slowly away, the son of Rasjaman took a position on the rail in last under Cristian Demuro.

At the head of affairs, one of three runners from Ballydoyle Taj Mahal set the pace with last year’s Racing Post Trophy-winner Rivet tracking him through in third.

Meanwhile, Demuro had begun to get his colt rolling. After making headway into midfield he switched him to the far outside for a late challenge inside the final 300 metres.

Brametot ran on strongly inside the final half-furlong and timed it just right getting up to win by a short-head from Andre Fabre’s Waldgeist.

Unbeaten in three starts this year, he now assumes second favourite for the Arc in the autumn at a general price of 7/1 behind his stable companion Almanzor who we have yet to see this year.

Brametot added a second Classic success to his resume

The five fillies raced in single file for the opening half of the contest, with Franck Blondel positioning his three-year-old filly in a handy second behind leader Speed As.

A daughter of Kingsalsa, La Sardane was last seen back in April finishing second behind one of today’s main fancies Senga in the Group 3 Prix de la Grotte.

She quickened to the lead a furlong out and while the more fancied Gold Luck and Senga began to make in-roads, she had enough to last out by a length. 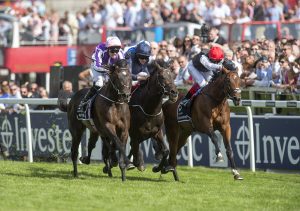 Up Next
Derby shock as Eagles swoops