Aidan O’Brien’s decision to drop Circus Maximus back to a mile for the St James’s Palace Stakes at Royal Ascot last month proved to be a stroke of genius and the three-year-old bids to follow up that success in Wednesday’s Group 1 Sussex Stakes.

Circus Maximus has once again been supplemented, this time at a cost of £70,000, and will face off against the John Gosden-trained Too Darn Hot, who returned to his best in the Group 1 Prix Jean Prat earlier this month.

The pair will line up against six rivals in the mile showpiece on Wednesday’s card, which also features Irish 2,000 Guineas winner Phoenix Of Spain and Queen Anne Stakes scorer Lord Glitters.

Roger Varian will send out the oldest horse in the race, the six-year-old Zabeel Prince, who is bidding to recapture his early season form that saw him land the Group 3 Earl Of Sefton Stakes and the Group 1 Prix d’Ispahan.

Varian, speaking to QIPCO British Champions Series, said: “I don’t think it’s gone his way over ten furlongs. Unfortunately, he’s run over that trip at two of the stiffest tracks in the country in Ascot and Sandown. I still feel he might get an easy ten, but we are bringing him back for the time being.

“He has to put two poor results behind him but for me there were reasons for those defeats. At Ascot the ground was bottomless, and in the Eclipse nothing was going better two out but he got stopped in his run, so Andrea [Atzeni] had to check him, which lost him his momentum.

“You don’t find easy Group 1s and the Sussex is certainly no exception but I think Zabeel Prince is still in great form. His Earl Of Sefton form reads very well, as well as his Prix d’Ispahan, and he beat them well that day.”

Wednesday’s racing at Goodwood also includes the Group 3 Markel Insurance Molecomb Stakes, where Wesley Ward’s highly-rated Maven heads the field of 13. The two-year-old, who is by US Triple Crown hero American Pharoah, missed an intended date at Royal Ascot due to the ground but made all in the Group 3 Prix du Bois to remain unbeaten.

Highclere Stud’s Cable Bay has made an impressive start to his stallion career with his first crop of two-year-olds and he is represented in the Molecomb by the John Quinn-trained Liberty Beach.

Owned and bred by Philip Wilkins, the filly has won three of her four races this season and was last seen at Sandown in the Listed Chasemore Farm Dragon Stakes, when she was a decisive three and a quarter length winner. 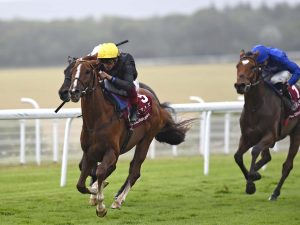 Up Next
Stradivarius rules Goodwood again