The ever popular Chester May Festival began in glorious conditions and it was to be a glorious first 188Bet Chester Cup for Andrew Balding, as his gelding Montaly got up to win in the shadows of the post.

Breaking from stall two, Montaly took a position just better than midfield on the rail under Oisin Murphy, who was partnering the six-year-old for only the second time.

As the tempo began to raise down the back for the last time, the Mark Johnston-trained duo of Watersmeet and Yorkidding set sail for home.

They came back to the others in the final half-furlong. Montaly switched out and burst through a gap between Yorkidding and the staying on Fun Mac in the remaining 75 yards to claim the honours by a neck.

For Balding, this is the biggest of the season so far, and the two mile and two furlong contest worth £120,000, had up until now alluded the Kingsclere maestro.

“It’s some job to get this horse today to win this,” reflected Murphy. “You’ve got to remember he’s been a long time off the track.

“I’ve had a few goes in the race and never really had a good run around but I had a good draw today and tried to keep it as smooth as I could.”

A son of four-time Ascot Gold Cup-winner Yeats, Montaly was hitting the winning line in front for the first time since August 2014.

Murphy added: “This horse is difficult to ride out in the mornings and he was off a career-high mark so it was really good planning.”

This horse is difficult to ride out in the mornings

Earlier in the afternoon, the John Gosden-trained Enable ran out a convincing winner of the Listed Cheshire Oaks.

The daughter of Nathaniel, sporting the famous Juddmonte silks, was going into the race on the back of an encouraging reappearance behind stable mate Shutter Speed.

In the hands of Frankie Dettori, she got first run on her main rival from Ballydoyle, Alluringly, and kept on strongly to land the prize by just under two lengths. 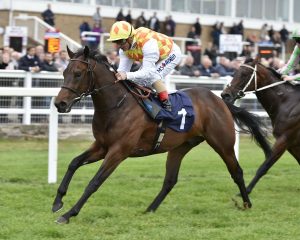