Son of Yeats topped the Tattersalls Ireland Cheltenham December Sale in 2018 when selling for £295,000

Chantry House, who provided connections with an emotional end to their journey together when selling for £295,000 at the Tattersalls Ireland Cheltenham December Sale in 2018, makes his first start under rules for trainer Nicky Henderson and owner JP McManus in a bumper at Kempton on Saturday.

The five-year-old had won a four-year-old maiden point-to-point at Tattersalls Farm for trainer Cian Hughes, owner Eric Elliott and jockey Jamie Codd just five days before he made six figures in the ring, selling to Michael Hyde.

Hughes said: “Eric set out with Willie Codd, Jamie’s brother, to buy a few horses and then sell them on at the sales. Chantry House was the last horse that Willie [who died in February 2018] bought for Eric and they both knew that he was a good horse from early on.

“He came with a big reputation, so I didn’t train him too hard, just trusted that he was a good horse. The point-to-point that he ran in for me, nothing really went to plan.

“He stood off the second fence and got a fright, then he ran off the bend in the home straight, but he showed his ability when he was still able to win when those things happened.”

New top lot! £295,000 is the price for Chantry House knocked down to Michael Hyde from @Chthoroughbreds pic.twitter.com/TVPAHNLrAl

Hughes, a former amateur jockey who in 2015 set up his own yard specialising in pre-training and preparing breeze-up horses in Newcastle, County Dublin, is looking forward to seeing the son of Yeats make his debut in familiar colours.

Back in 2013 it was the JP McManus-owned Mountain Tunes who provided AP McCoy with his 4,000th winner as a jockey when making his debut for Jonjo O’Neill in a 2m5f novice hurdle at Towcester.

The son of Mountain High had been in the care of Hughes, winning on his second start by five lengths in a Tyrella maiden point-to-point, and was picked up by Frank Berry for £75,000 at the 2013 Cheltenham April Sale.

Hughes said: “I’m looking forward to seeing Chantry House run and hoping he runs well. I wouldn’t be too worried if he didn’t win the bumper as he looks the real sort to be a staying chaser but hopefully, he does go out and win.”

Henderson’s new charge will face ten rivals in the two-mile bumper including the Paul Nicholls-trained Enrilo, already a winner, and the Nick Williams-trained Faire Part Sivola, last seen winning a bumper at Wincanton in January.

The son of Shantou will bid to match the exploits of Al Dancer – who like Angels Breath carries the colours of Dai Walters – a decisive winner of the Grade 3 Betfair Hurdle at Ascot last Saturday. 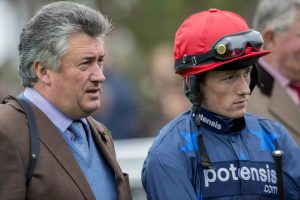 Up Next
Five key moments from Nicholls' career