This breakthrough victory comes no doubt as a welcome tonic for the Pau handler, who is still dealing with the consequences of a debilitating virus which swept through one of his three yards last month.

Two of his horses did not make it. Housed in the same barn is none other than French Derby-winner and Champion Stakes hero Almanzor.

The race itself saw challengers from Britain and Ireland descend on Deauville in what looked a fairly open renewal.

From the outset, the 13 runners split into two groups with the William Haggas-trained Rivet leading the far-side and Orderofthegarter, one of Ballydoyle’s contenders, leading those towards the stands.

As the two groups merged into the final three furlongs, Rivet travelled kindly in the hands of Frankie Dettori and looked to attain a narrow lead.

Cristian Demuro aboard Brametot, who sat last on the stands-side group early on, made rapid headway two furlongs out to deliver what looked a strong challenge to Rivet.

Meanwhile, Andre Fabre’s unbeaten Le Brivido got up ahead of steam on the far-side and took the lead inside the furlong pole.

Rouget’s charge knuckled down into the final 100 yards and got up to land his first Group 1 prize by a short-head.

A son of the Group 1-placed Rasjaman, the Al Shaqab part-owned colt did advertise himself as a leading prospect for the race after putting up a dominant display in the Group 3 Prix de Fontainebleau in mid-April.

Of the British and Irish challenge, Rivet fared the best with a creditable third just three lengths behind the front two.

Orderofthegarter, Aidan O’Brien’s seeming first string according to the betting, came under pressure some way from home but stayed on to finish fifth.

A welcome tonic for the Pau handler

Prix Saint-Alary
Three-year-old fillies took centre stage earlier on Deauville’s card in the Group 1 The Gurkha Coolmore Prix Saint-Alary over a mile and a quarter.

It unveiled an impressive winner in the shape of Godolphin’s Sobetsu, who was last seen finishing down the field in the Fillies’ Mile at Newmarket last autumn.

The daughter of Dubawi, trained by Charlie Appleby, raced prominently throughout in the hands of William Buick.

When asked in the straight, she picked up strongly leaving her rivals in her wake and taking the victory by three-lengths. 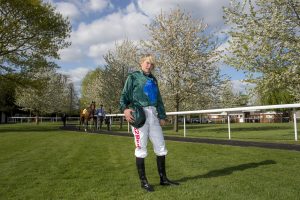 Up Next
Champion apprentice strikes at Ascot