Upsets at Lingfield in Derby and Oaks Trials
News

Bolshoi Ballet was slashed into 2/1 favouritism for the Derby after turning in an impressive performance to win Sunday’s Group 3 Derrinstown Stud Derby Trial at Leopardstown.

The colt’s win capped a productive day for Aidan O’Brien and Ryan Moore, who had earlier hit the scoresheet courtesy of Joan Of Arc’s easy win in the Group 3 Irish 1,000 Guineas Trial.

The Derby Trial was billed as a match between Bolshoi Ballet, fresh off his win in last month’s Ballysax Stakes, and last year’s Vertem Futurity hero Mac Swiney. However, there was never a moment’s doubt for supporters of Bolshoi Ballet, with the colt always travelling sweetly behind pacemaker Wexford Soil before unleashing a winning turn of foot to propel him clear of the  pack.

At the line, he had six lengths to spare over stablemate Lough Derg. Fernando Vichi was another half-length away in third while Mac Swiney weakened to finish a disappointing fourth.

Moore was understandably impressed with his mount, who was winning for the third time in five starts.

“He’s in a good place. It was a proper test today – it’s very windy and inexperienced horses get knocked around – and it will stand him in good stead. What he did was impressive and he ticks a lot of boxes.”

The latest emerging star for Galileo, Bolshoi Ballet is a brother to Australian Group 2 winner Southern France, also a Group 3 winner during his time with Aidan O’Brien, and was bred by Lynch-Bages & Rhinestone Bloodstock out of Alta Anna, by Anabaa.

Galileo also featured earlier on the card as the sire of Joan Of Arc, who made virtually all to win the Irish 1,000 Guineas Trial from Flirting Bridge. Back in third was Thinking Of You, by coincidence a close relation to the winner.

Joan Of Arc boasts one of the best pedigrees in the book as a sister to Classic-winning milers Gleneagles and Marvellous in addition to the Group 1-winning two-year-old Happily and Classic-placed Vatican City. They are out of Cherry Hinton Stakes winner You’resothrilling, a sister to Giant’s Causeway and to the dam of Decorated Knight.

Joan Of Arc will now head to the Irish 1,000 Guineas, where she will bid to emulate Marvellous, the 2014 heroine.

“She deserves to take her chance at a higher level, she does everything right,” Moore told Racing TV. “She’s a high-class filly and a beautiful mover – ground quicker might help her again. She’s going the right way and I think there’s a chance that she’ll stay further.” 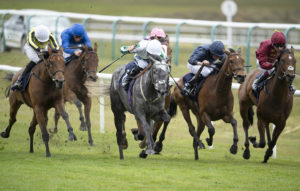 Up Next
Upsets at Lingfield in Derby and Oaks Trials