Participation from a deep domestic and international buying bench helped push trade for elite breeding stock to some heady heights this past week in Lexington, Kentucky.

Although figures failed to match last year’s levels at the Fasig-Tipton November Sale, demand for anything of real quality was ferociously strong, as the presence of 18 million-dollar lots illustrates.

However, Book 1 of the Keeneland November Sale did post an improvement in total sales from last year, rising 14.4 per cent to $70,449,500 while featuring 14 million-dollar lots compared to eight in 2018.

It was a bold opening to a marathon sale that still has 11 sessions to run through November 17.

There is little more portent to the potential of a sale prospect than a Grade 1 update, especially when it occurs on the international stage.

Already a deep catalogue when it went to press, the Fasig-Tipton November Sale received several major boosts in the days leading up to the sale when a number of entrants performed with credit at the Breeders’ Cup at Santa Anita, none more so than Blue Prize, who upset Midnight Bisou in the Distaff, and Belvoir Bay, who ran a record-setting 54.83s for five furlongs to win the Turf Sprint.

Both duly lit up the ring, led by Blue Prize, who will join the fledgling broodmare band of Larry Best of OXO Equine after selling on a sale-topping bid of $5 million.

The multiple Grade 1 winner, sold by Bluegrass Thoroughbreds on behalf of John Moores and Charles Noell’s Merriebelle Stable, was one of 18 seven-figure lots during a memorable evening of trade.

“We’re very pleased with the overall results tonight,” said Fasig-Tipton President Boyd Browning. “There was tremendous competition across the board from buyers around the world. And when you have the confidence of men and women with quality horses, you can have exceptional sales.

“It was neat to see international participation and strong domestic participation. The market was not dominated by any individual or a small number of groups. It was a tremendous sale.”

Sale-topper Blue Prize was already considered an elite offering prior to her Breeders’ Cup triumph, having captured a Grade 1 in her native Argentina and consecutive runnings of the Grade 1 Spinster Stakes at Keeneland following her transfer to the barn of Ignacio Correas in the US. In all, she won ten of 23 career starts for earnings of $2,692,253. 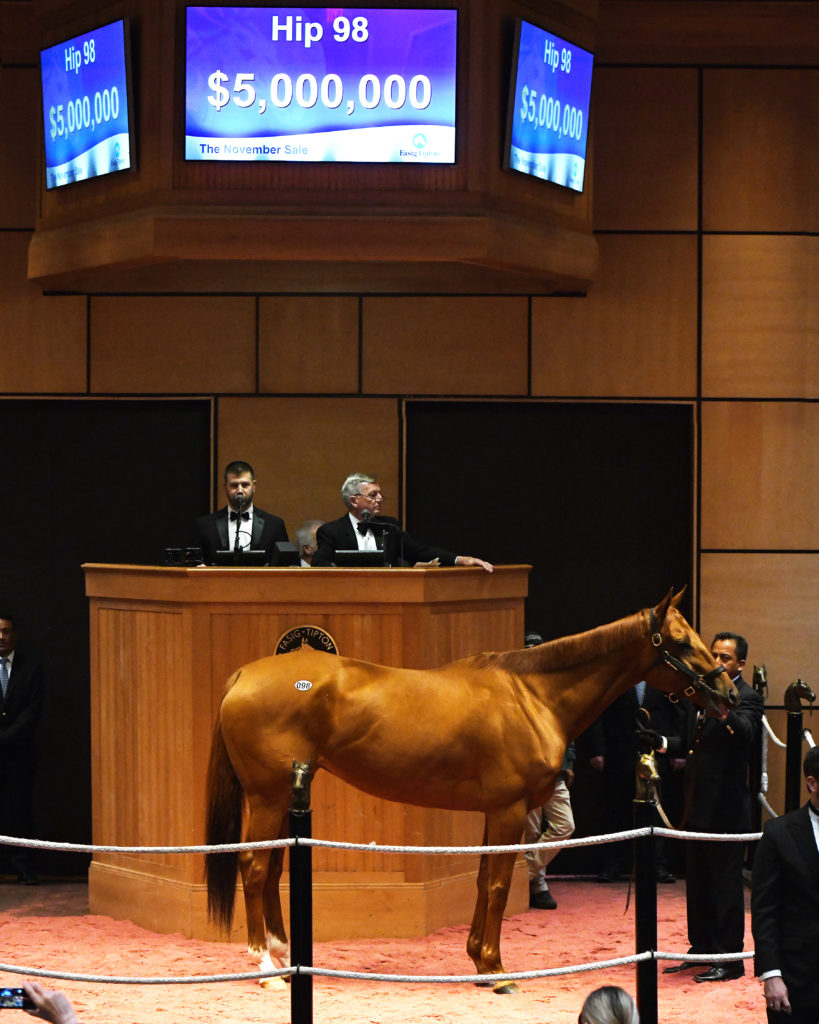 The daughter of Pure Prize – himself a beautifully bred son of Storm Cat – is set to become a fourth broodmare for Best, a relatively new major player on the American scene who recently tasted Grade 1 success as the owner of last month’s Queen Elizabeth II Challenge Cup heroine Cambier Parc.

British-bred Belvoir Bay, meanwhile, was snapped up by agent Mike Shannon for $1,500,000 for an undisclosed client. Bluewater Sales sold the mare on behalf of owner Gary Barber.

The daughter of Equiano, bred by the late Lennie Peacock, boasts a remarkable story. Bought for just 20,000gns as a yearling by Peter and Ross Doyle, she struck in a nursery at the Qatar Goodwood Festival for Richard Hannon before changing hands to Team Valor, who subsequently campaigned her in partnership with Barber.

Sent to Peter Miller, Belvoir Bay proved to be as versatile as she was talented, capturing stakes on both turf and dirt including the 2018 Grade 2 Monrovia Stakes at Santa Anita.

Yet the mare subsequently came back better than ever, winning five stakes and running second to Blue Point in the Group 1 Al Quoz Sprint prior to her crowning victory in the Breeders’ Cup.
Plans now call for Belvoir Bay to retire to stud in the US.

A strong show of Japanese investment was led by the $2.7 million sale of Photo Call, a Grade 1-winning daughter of Galileo, to Katsumi Yoshida of Northern Farm.

The sale provided Yoshida with the opportunity to buy into the one of the most active European families of the current era; as a granddaughter of blue hen Cassandra Go, Photo Call is a close relation to both Magical and Rhododendron and a half-sister to last year’s Richmond Stakes winner Land Force. Adding further allure was the fact the mare was offered in foal to leading sire Quality Road.

Photo Call also has a War Front yearling filly that is slated to join John Gosden.

PHOTO CALL (IRE) sells for $2.7M at The November Sale. G1W i/f to Quality Road was purchased by Katsumi Yoshida from the consignment of @Denalistud, agent. #FasigNovember #FasigSelected @LanesEndFarms pic.twitter.com/CDP63pCi0a

The best runner sired by Skipshot, Vasilika was claimed by trainer Jerry Hollendorfer and George Todaro for just $40,000 in February 2018, after which she proceeded to rattle off eight Graded stakes wins, including the Grade 1 Gamely and Rodeo Drive Stakes.

As for Secret Spice, the Godolphin-bred was once bought by pinhooker Paul Sharp for just $4,000 as a yearling. She retires with close to $550,000 in earnings.

Redvers, signing on behalf of a new partnership as Hunter Valley Farm, went to $2.1 million for the Candy Ride filly Separationofpowers, winner of the 2017 Grade 1 Frizette Stakes and 2018 Grade 1 Test Stakes.

Stock belonging to the Hill ’n’ Dale/Elevage dispersal dominated Book 1 of the Keeneland November Sale, accounting for three of the top five lots.

Back in 2015, Sikura and Elevage, an entity led by Glen Hill Farm’s Craig Bernick, teamed up at this sale to purchase Take Charge Brandi for a sale-topping $6 million.

As that price suggests, the hardy daughter of Giant’s Causeway possessed race record and pedigree; winner of the Breeders’ Cup Juvenile Fillies and Grade 1 Starlet Stakes, she is a granddaughter of Grade 1 heroine Take Charge Lady, herself dam of Grade 1 winners Will Take Charge and Take Charge Indy.

Take Charge Brandi is also a half-sister to this season’s top three-year-old Omaha Beach, who ran second in the Breeders’ Cup Dirt Mile only last weekend.

“It’s an impeccable female family,” said Sikura. “You get almost no opportunity to get into this family. I have a long-term view; the commercial aspect is part of what I do, but I have to cultivate it and develop female families and create things of significance.

“When I get that opportunity, I’m less concerned about what they bring and more concerned about having access and being able to buy a mare that we hope can be important and create change long term.” 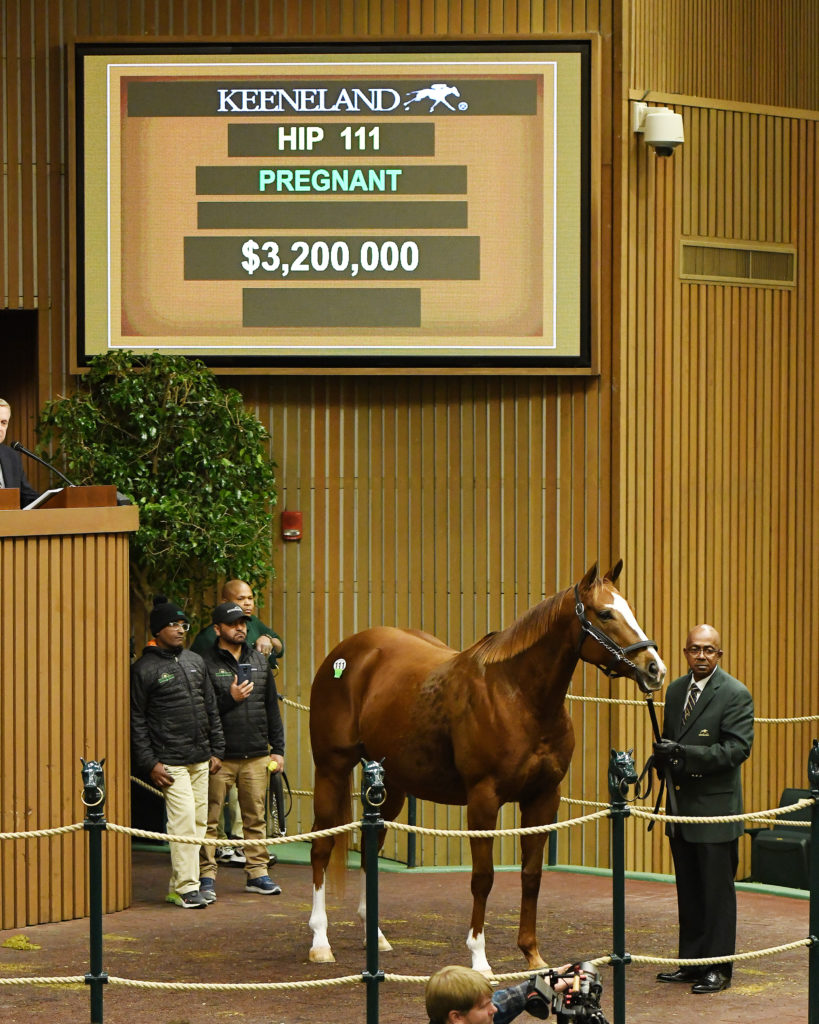 Fresh from acquiring three seven figure lots at Fasig-Tipton the previous night, Katsumi Yoshida also continued to add to his collection, notably when going to $2 million for Grade 1 winner Callback, another member of the Hill ’n’ Dale/Elevage dispersal. The daughter of Street Sense was sold in foal to Medaglia d’Oro.

“She’s from a very good family,” said Shunsuke Yoshida, who signed the ticket. “(Covering sire) Medaglia d’Oro is more popular here (compared to Japan), so we need to think about (where she will go) – if she will stay here. I’ll talk to my father tonight and we’ll decide.

“You get almost no opportunity to get into this family”

“We are going to keep some broodmares in Europe as well now, so after the sale is finished, we’ll decide which mares are going where. There are many good sires in the United States and Europe, so there are plenty of options.”

The third member of the dispersal to hit seven figures was stakes winner Mei Ling, who joined Claiborne Farm on a bid of $1,500,000. By Empire Maker, she was sold in foal to Medaglia d’Oro.

In all, the Elevage Dispersal yielded sales of $11.7 million for 13 horses.

Katsumi Yoshida wasn’t the only member of his family to strike at Keeneland. Teruya Yoshida’s Shadai Farm came away with the second dearest lot of the session in Eskimo Kisses, last year’s Grade 1 Alabama Stakes heroine.

Sold in foal to Curlin by her breeder Gainesway Farm, the daughter of To Honor And Serve is a granddaughter of the iconic racemare Winning Colors, one of the few fillies to win the Kentucky Derby.

It was also a busy day for Jane Lyon’s Summer Wind Farm, with the outfit coming away with Lil Indy, dam of the Kentucky Derby first past the post Maximum Security, at $1,850,000 and Grade 3 winner Gloryzapper at $1,500,000. 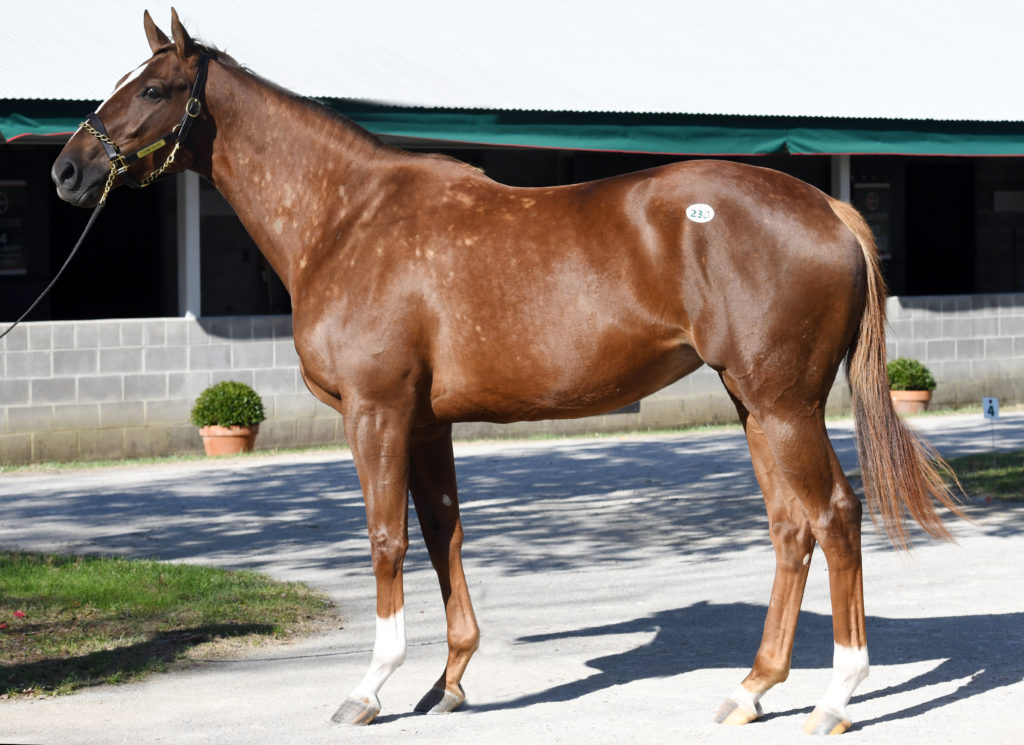 Eskimo Kisses was offered in foal to Curlin – Photo: Keeneland

Galileo mares in foal to Triple Crown winner Justify also proved to be a potent combination.

Minding’s sister Conquest was the dearest such mare to pass through the ring, commanding a bid of $1,250,000 from James Wigan’s London Thoroughbred Services, acting on behalf of Erdenheim Farm.

“Beautiful family. Galileo mares, as we all know, are very, very good,” said Wigan. “It’s a wonderful cross, and she’s in foal to a good stallion and from one of the strongest pedigrees in the book. Very happy to get her. We were sort of stretching ourselves but very happy to have her. I thought the market is very strong for the good animals.”

Demand was also fierce for Hourglass, a half-sister to Shamardal, who made $1,100,000 to the China Horse Club.

“A number of positive factors contributed to the significant rise in gross sales today: broad trading, quality offerings, a strong weanling market and our supplemental entries, which produced more than $3 million at the end of the session,” Keeneland Director of Racing and Sales Bob Elliston said.

“We are proud that John Sikura and Craig Bernick chose Keeneland for their unique Elevage dispersal; their horses sold very well here today. We also appreciate the tremendous support from our Japanese buyers and Jane Lyon of Summer Wind.” 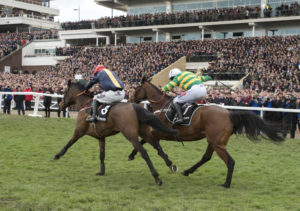