Having dazzled on the racetrack at Royal Ascot, Godolphin’s star sprinter Blue Point took a starring role at the Darley Stallion Parade at Dalham Hall Stud on Friday.

The son of Shamardal had secured the King’s Stand Stakes and Diamond Jubilee Stakes double at the Royal Meeting last month before connections announced that the five-year-old would be retired from racing.

On Thursday, it was confirmed that Blue Point would join his sire at Kildangan Stud for the 2020 breeding season.

Of the four-time Group 1 winner joining the roster, Darley’s director of stallions Sam Bullard said: “Shamardal isn’t getting any younger but luckily, as we know, he’s been having an amazing year. To have a son of this quality, especially when Lope De Vega is doing so well already, on our roster is very exciting.

“That’s why the decision was taken [for Blue Point to stand at Kildangan] as breeders know what to expect and what to get from Shamardal.”

Blue Point’s exploits have taken him all over the world and Bullard congratulated trainer Charlie Appleby and his team for the way they have handled his career.

“They deserve huge credit for the way they’ve kept Blue Point competing at the top of his game wherever he’s gone,” said Bullard. “Ascot was an incredible day.”

As well as Blue Point, Darley’s flagship sire Dubawi was on show to guests along with the likes of Brazen Beau, Night Of Thunder and Golden Horn, all of whom have their first two-year-olds running this year.

Night Of Thunder is another on the @DarleyStallions roster to have made a fantastic start to his stallion career. The son of Dubawi has sired 11 winners from his first crop of two-year-olds pic.twitter.com/bpnCD5RqrV

Night Of Thunder, who beat Kingman in the 2014 2,000 Guineas, has made a big impression with his first crop having supplied 12 winners, including the promising Keep Busy. Brazen Beau’s clutch of scorers features the Listed-winning duo Accession and Avengers Queen, while West End Girl became Golden Horn’s first winner last week.

Bullard commented: “Now Poet’s Voice has gone, to have Night Of Thunder as Dubawi’s obvious successor is fantastic. His ratio of winners to runners is remarkable and way exceeds anything else.

“We expected Brazen Beau to make a fast start. That’s why he came to stand over here with his pedigree and what he achieved in Australia. He is rewarding the breeders who took a risk on using him.

“What is nice about Brazen Beau is the level of quality of his two-year-olds and how many he has rated over 80.

“The Golden Horns are looking really exciting and West End Girl won quite surprisingly at Haydock the other day. He had another second last night which means we’re up and running with him now.

“We’re trying to keep a balanced roster throughout Europe and trying to spread young horses so that every breeder, wherever they are, has an opportunity to use an attractive young horse at every level.” 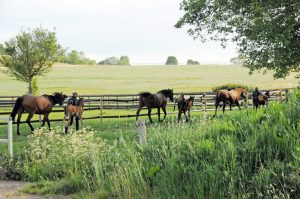 Up Next
Salcey Forest Stud relocates to new home