Blue Point does the double

Godolphin’s superstar sprinter Blue Point became only the third horse to complete the King’s Stand Stakes/Diamond Jubilee Stakes double when pulling out all the stops to take the six-furlong Group 1 at Royal Ascot on Saturday.

James Doyle, partnering the five-year-old for the second time this week, was noted travelling well on the son of Shamardal and, kicking on a furlong from home, kept enough up his sleeve to hold off the late challenge of Dream Of Dreams to score by a head.

In completing the double, Blue Point becomes the first horse since Choisir in 2003 to win two races at the Royal meeting and enhances his value as a stallion when he retires to stud at the end of this season.

Trainer Charlie Appleby said: “We thought about it [the double] the week before – he put in a very good piece of work ahead of the King’s Stand and His Highness Sheikh Mohammed came into town a bit early.

“We were walking around looking at the Royal Ascot runners and I said, ‘Sir, if you are happy we will leave the horse in on the Saturday, let’s just dream we can win the King’s Stand and give ourselves a position to go and have a crack at the Diamond Jubilee’.

“Blue Point is going to retire this year – he’s a superstar. We will let the dust settle, this was always going to be his last year, win lose or draw. We’ll enjoy this moment and let the horse have a rest – he probably needs it for a couple of weeks.”

Earlier on Saturday, Godolphin’s Pinatubo recorded a devastating success in the Listed Chesham Stakes, smashing the juvenile track record in the process.

Pinatubo had taken the eye at Epsom last month when scooting to victory in the Woodcote Stakes despite not handling the camber at the Surrey track.

That put him on a collision course with Aidan O’Brien’s exciting Lope Y Fernandez in the Chesham Stakes and as the pair travelled up the Ascot straight, it was Pinatubo who zipped clear to win by three and a quarter lengths.

Appleby said: “He was very impressive. He was two from two coming here and he surprised us when he won first time out at Wolverhampton, to be honest. But he learnt plenty that day.

“When he went to Epsom I was confident, you need a bit of race ‘nous’ around there and what he learnt on his first start was enough going into that race.

“Today was one of those nice races to watch. I was quite confident throughout the race that we were going to be there at the business end.”

Doyle said: “I’m delighted with Pinatubo. I had to hold onto him and save his energy. Then once we got a bit of room, he quickened up very well late on and put it to bed nicely.

“I can see Pinatubo getting another furlong. There are plenty of options over seven furlongs for the moment. He’s not slow by any means.”

He had already notched three winners on the board at Royal Ascot this week and on Saturday, jockey Danny Tudhope added a fourth success to his tally when partnering the Richard Fahey-trained Space Traveller to victory in the Group 3 Jersey Stakes.

Godolphin’s Space Blues looked as if the race was at his mercy but Tudhope and Space Traveller were making rapid progress on the far side rail to deny Appleby and Doyle a quick-fire double by a head.

Tudhope said: “To be honest, Space Traveller didn’t travel great, he never felt like a horse who was going to pick up and go and win the race. He was a bit lazy halfway, so I had to make his mind up – when he got out in the clear, he ran on nice.

“It has been an amazing week for me. I can’t really put it into words, I am just thankful to everybody who has helped me.”

The Roger Varian-trained Defoe backed up his win in the Group 1 Coronation Cup on Saturday despite being pushed all the way to the line by Czech raider Nagango Gold in the Group 2 Hardwicke Stakes.

It was a race that featured the return of 2018 Derby hero Masar, who lost his footing when the stalls opened and hampered Nagano Gold, who eventually went down by half a length.

Varian, who was registering a second win of the week, said: “That was a good performance from Defoe, who has taken his form forward from Epsom. It’s always nice when they back up a victory like that in their next race. It was a tough performance.”

Atzeni, recording a first winner of the week, said: “Defoe is very straightforward and he’s actually a dream horse to ride. He’s very cool beforehand, and he jumped and travelled well.

“We didn’t go very quick, and then turning into the straight Masar came to me fairly easily, but to be fair to him he picked up nicely and fought all the way to the line.”

Varian and Atzeni combined later in the day in the Wokingham Handicap with Cape Byron, who was an impressive winner of the 6f contest.

Trainer Andrew Balding capped off Royal Ascot 2019 with his second winner of the week when Cleonte scored in the Queen Alexandra Stakes, the longest race of the meeting run over a distance of 2m5½f.

Running in the colours of King Power Racing and ridden by Silvestre De Sousa, Cleonte got on top of a battle with the Willie Mullins-trained Max Dynamite before pulling clear of Pallasator to record a one and a quarter length victory. 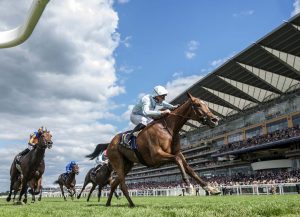 Up Next
Watch Me springs a Royal surprise