Agent Aiden Murphy walked away with the one lot he “really wanted” at the rescheduled Tattersalls Ireland May Store Sale on Tuesday when going to €115,000 for a son of Blue Bresil.

The gelding, who was offered by Rathbarry Stud, was a £26,000 pinhook by Hamish Macaulay and is out of the unraced Epalo mare As Was, which makes him a half-brother to The Two Amigos, who finished second in last season’s Welsh Grand National.

Further back on the page are the Grade 3 winners Line As and Sizing Pottsie.

Murphy said: “He is the one I really wanted today. He is a lovely horse and has a pedigree. He is a great advertisement for the sire, he goes to Olly [Murphy] and is for Diana and Grahame Whateley.”

Macaulay added: “I bought him as a yearling for Rathbarry, who wanted some by the sire when they had just started to stand Blue Bresil. He was always very nice and has done well and everyone wanted him today!”

Murphy also signed at €48,000 for a gelding by the now retired leading National Hunt sire Kayf Tara out of the Polish Precedent mare Silent Waters who was consigned by Liss House.

“He is a typical Kayf Tara, and I love him as a sire,” said Murphy. “The mare has proven she can get winners and at the moment the horse been bought on spec by myself and Olly.”

The very last lot through the ring, Elms Bloodstock’s gelding by late German sire Adlerflug who hails from the family that has produced Arc runner-up In Swoop, was snapped up by Tom Malone for €72,000. 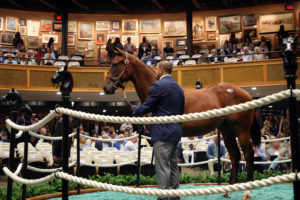 Up Next
Sense of deja vu as Uncle Mo colt sells for $1.6 million at Fasig-Tipton